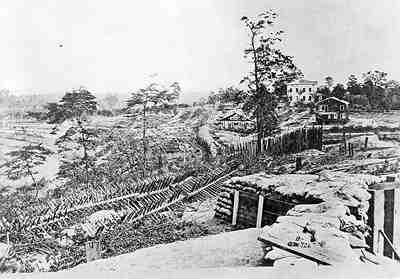 The Atlanta Region Civil War sites, out of all the regions in the book, have the greatest range of substance, style, and historic importance because of several factors. First, Atlanta was burned by Federal troops in 1864, destroying most historic structures. Second, Atlanta's civic leadership has generally been more focused on constructing new buildings instead of saving older ones. Third, thanks to this same leadership, the economic prosperity Atlanta has experienced — like a phoenix rising from the ashes — has obliterated many battlefields, as the railroad town of 10,000 has grown and developed to an urban area of more than 2 million.

The good news for Civil War buffs is that some sites are in great condition and available for touring. The Kennesaw Mountain National Battlefield Park, opened in 1935 and covering 2,884 acres, is a gem, and much can be experienced and learned by touring these historic grounds, where you can actually see trenches from the battle and learn the life-and-death importance of high ground. This park is in marked contrast to many of the battlefields near Atlanta, which consist mainly of state historical markers next to busy highways. Here, your imagination is needed. Although most of the historic homes of Atlanta were razed or destroyed in battle by Sherman, towns surrounding Atlanta — Marietta, Roswell, Jonesboro, and Decatur — have historic homes open to tours. There are excellent Cemeteries to tour in the Atlanta area, including Oakland Cemetery, the Confederate Cemetery in Marietta, Marietta National Cemetery, the Patrick R. Cleburne Memorial Cemetery in Jonesboro, and Westview Cemetery. Good museums include the Atlanta History Center, the Cyclorama, Kennesaw Civil War Museum, and the DeKalb Historical Society Museum. And don't forget Stone Mountain Park. The North has the impressive Mount Rushmore, but the South has Stone Mountain, a carving of Confederate heroes Robert E. Lee, Thomas J. "Stonewall" Jackson, and Jefferson Davis. The South's is larger. If you can make it to one of the summer's nightly laser shows to hear Elvis sing Dixie, then you've experienced something uniquely southern.

Atlanta was the prize sought by the Union and for good reason. Atlanta was second only to the Confederate capital of Richmond in importance to sustaining the Confederate government. Atlanta, the "Gate City of the South," had become the transportation hub of the Confederate war machine, with four railroads connecting here. Rail lines spoked out from Atlanta, going east to the Atlantic seaboard states and the Eastern Theater and Richmond. West, it was the backdoor to the blockaded Confederate seacoast states; north to Chattanooga and the mid-south states and Western Theater; and south to the Atlantic seaboard and port of Savannah. Atlanta served 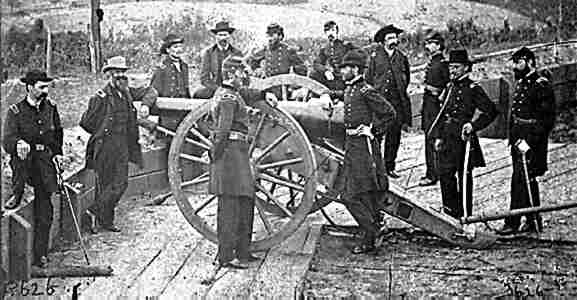 as a vital arsenal, and was a productive factory town manufacturing war materiel of all kinds, from cannon and rifles to rails and armor plate, to uniforms and even wooden coffins. Atlanta also was vital in supplying the Confederacy with food supplies, connecting the rich farmlands and breadbasket of the south — Georgia, Alabama, and Mississippi — with all other points of the Confederacy. Early in the war, Georgia and Atlanta's geographic position in the heart of the Confederacy insulated it from the more destructive ravages of war, except for the coast. Georgians had answered the call of their new government, and supplied approximately 112,000 men (some were among the best troops, generals, and officers in government), who fought in almost every battle of the Civil War. When Grant was commissioned General-in-Chief of the entire U.S. Army on March 10, 1864, he appointed his friend W.T. Sherman as commander of the Western Theater. At a meeting in Cincinnati, they agreed on a simple plan to end the war: The two main armies would move simultaneously against the two great armies of the Confederacy, with Grant pounding his way to Richmond and Sherman fighting his way 100 miles from his base in Chattanooga to strategically important Atlanta. This strategy would prevent the south from reinforcing either front, and either Grant would get to Richmond first, or Sherman would help split the Confederacy and strangle the Eastern Theater by destroying Atlanta. Thus the Atlanta Campaign was born, which led to the major Civil War events in the Atlanta area (after Sherman had fought his way through northwest Georgia) from June 15 to Sept. 2, 1864 when Atlanta surrendered, including battles at Gilgal Church, Kolb's Farm, Kennesaw Mountain, Peachtree Creek, Atlanta or Bald Hill, Ezra Church, Utoy Creek, and Jonesboro. Also in the Atlanta area was the beginning of one of the more famous stories of the Civil War, the "Great Locomotive Chase," on April 12, 1862, and the start of Sherman's infamous "March to the Sea" on November 15, as Atlanta was in flames.