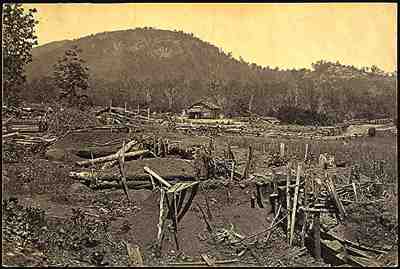 A series of running battles, sometimes called the "battles before Kennesaw," or the "Lost Mountain/Brush Mountain Line," took place before the major battle at Kennesaw Mountain. In this area, near the town of Kennesaw (formerly Big Shanty), the traveler will find many historical markers, one small park, and a museum dedicated to the "Great Locomotive Chase."

The Battle of Gilgal Church, from June 15-17, 1864, was a prelude to fighting at Kennesaw Mountain. U.S. Maj. Gen. Daniel Butterfield, composer of Taps, fought Confederate Maj. Gen. Patrick Cleburne here. To the northeast, some of the Union earthworks and an example of a Civil War entrenchment can be found. The original church, destroyed in the battle, stood several hundred yards from here at the crossroads.

This museum houses the General, the locomotive of the "Great Locomotive Chase," which was stolen less than 100 yards from this spot. It is housed in an authentic cotton gin, and the museum has many exhibits, a video explaining the raid, and a gift shop. 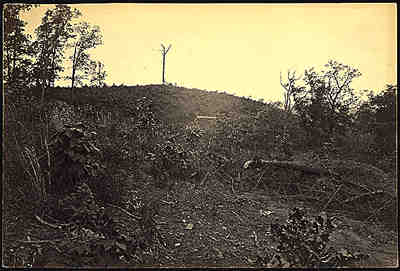 On top of this mountain on June 14, Confederate generals Joseph Johnston, William Hardee and Leonidas Polk — the "Fighting Bishop" — were reviewing the Lost Mountain line. They were spotted by Gen. W.T. Sherman, who personally ordered artillery fire on the mountain. When the shells started landing, the generals scrambled to take cover, but the fat, dignified churchman, Polk, was slow to move and took a shell through his body, mangling him terribly and killing him instantly. In his pocket, Johnston found three bloody books of spiritual guidance that were inscribed as gifts for Johnston, Hood, and Hardee. A 20-foot tall, marble shaft marks the spot where Polk was killed on the summit of the Pine Mountain, located on private property and not open to the public. For more information, contact Kennesaw Mountain National Battlefield Park at 770-427-4686.