Start your tour at the Visitors Center, which has exhibits, maps, an audiovisual introduction to the June 27, 1864 battle, an 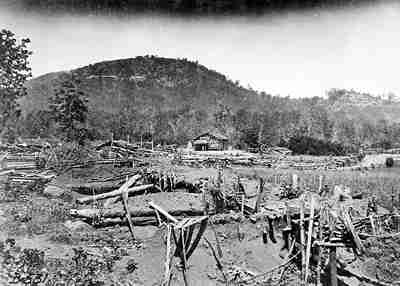 excellent bookstore, and during the summer, living history demonstrations. Materials at the Center will guide you to the sites described here. Various trails are available for hiking over the 2,882-acre park, totalling 2, 5, 10, and 16 miles roundtrip. One, located behind the Visitors Center, takes you to the top of the mountain where weather permitting you can get a great view of the Kennesaw area battlefield and Atlanta. The battlefield has many interesting intact entrenchments from the battle. At Cheatham Hill, you can see the site of the fiercest fighting — called the "Dead Angle" — Confederate and Union trenches, the magnificent Illinois monument, and the Tunnel monument which marks where trapped Federal soldiers tried to blow up entrenched Confederates. Going down Cheatham Hill, you can follow a trail 600 yards to where the Federal attack began. Notice the granite monument to Dan McCook, one of the "Fighting McCooks" and former law partner of Gen. W.T. Sherman, who died during the assault. For a complete understanding of the battle, travel to Pigeon Hill, named for the extinct passenger pigeon, which rested here on its annual migrations. Kolb's Farm, located near the park, has been restored but is not open to the public. A pull-off area with markers and interpretive signs help the traveler understand this bloody battle, which occurred on June 22, 1864. U.S. Gen. Joseph Hooker used the 1836 cabin as his headquarters after the encounter. A living history event is held each year on the weekend closest to the anniversary of the battle (June 27).