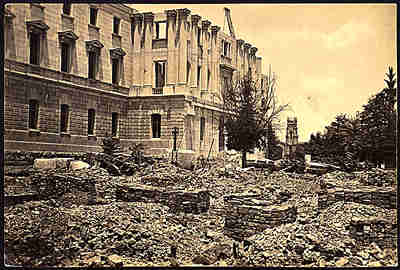 Marietta started as an antebellum planter's retreat, and some of the historic homes remain from the Civil War period, despite the destruction Sherman brought to the area. Wealthy coastal planters had summer homes in Marietta, with its 1,100-foot elevation and springwaters, to escape the stifling heat and yellow fever epidemics. The injured were attended to here during the battles in the Kennesaw area, and two large Cemeteries are found here. The Georgia Military Institute, which supplied many officers to the Confederate cause, was located here, but burned when Sherman moved on to the coast. Camp McDonald, was one of the three camps of instruction for volunteers in Georgia. The Andrews Raiders, of the "Great Locomotive Chase" made their plans at the Kennesaw House, located next to the Visitors Center.

The depot is not from the Civil War, but it is built on the original site. Sherman's men burned the original. This one, built in 1898, houses the Marietta Welcome Center. Available here is a guide to a driving tour of 52 sites on the National Register of Historic Places, including homes used as generals' headquarters and churches used as hospitals.

Built in 1855 as a summer resort hotel and known as the Fletcher House, James Andrews and his raiders met here April 11, 1862 to finalize their plans to steal the General the next day. Civilian refugees from Tennessee and Kentucky stayed here, moving south as Federals drew near. It was used as a hospital during the war, and Gen. William T. Sherman briefly established his headquarters here, July 3, 1864, when Johnston retreated to his River Line in front of the Chattahoochee. Partially burned by Union troops when Sherman left to go on his "March to the Sea," it was remodelled, and today it houses a restaurant and offices.

U.S. Gen. John Schofield made his headquarters here from June 22-30, 1864 during the Atlanta Campaign. From here, he commanded troops in the Battle of Kolb's farm nearby and made the "only advantage of the day," when he was able to get around John-ston's flank during the Battle of Kennesaw Mountain. The house was used by the Signal Corps, artillery, and as a hospital during this time. The house is privately owned and not open for tours.

Built in 1852, this was Confederate Gen. Joseph E. Johnston 's headquarters during the Battle of Kennesaw Mountain. Today it serves as the Marietta Educational Garden Center and is open to the public.

This house was built by Charleston planter and Marietta's first mayor, John H. Glover, and was located on a 3,000-acre plantation called Bushy Park. It took seven years to build. Sold to William King, he recorded in his diary a cavalry skirmish on the property during the Atlanta Campaign, July 3, 1864. A bullet from battle rests embedded in a wooden door frame. Today, it is a restaurant.

This beautiful, 24-acre cemetery, established in 1866, contains the remains of more than 10,000 Union soldiers, 3,000 unknown, who lost their lives south of Resaca. The land was offered by Henry Green Cole as a joint Union and Confederate cemetery, hoping it would heal ill-feelings. When this effort failed, Cole offered it to the Federal Government for use as a Union cemetery. His offer was accepted. Monuments to various states are found in the cemetery, as are soldiers from five other wars.

The largest Confederate cemetery in Georgia, with approximately 3,000 soldiers from fourteen states buried here, the first being a Confederate army physician, in early September, 1863, and the last being the black body servant of Thomas McCall Yopp. In 1866, a project was begun to remove the Confederate dead from Chickamauga and the Atlanta Campaign battlefields. A statue to the memory of these men and Cobb County veterans has been erected in the cemetery. A bronze cannon, used for training by the Georgia Military Institute (formerly located across Powder Springs Road, directly opposite the cemetery and burned by Sherman's men) and by cadets opposing Sherman's "March to the Sea," is located in the cemetery. Sherman seized the cannon in Savannah and sent it north as a trophy of war. It was returned in 1910.