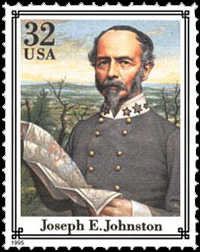 Confederate General Joseph Eggleston Johnston was a complex military man who never lost a battle, but never won a major battle either. Born in 1807 in Price Edward County, Virginia, to a Revolutionary War veteran, Johnston attended West Point, graduating 13th in the class of 1829. He served on the Black Hawk expedition, resigning to become a civil engineer. He was wounded five times in the Mexican War, where he fought at Cerro Gordo and led a charging column at Chapultepec. By the outbreak of the Civil War, Johnston had risen to brigadier general and chief quartermaster of the army. He resigned his U.S. commission and was promoted to full general after service at First Manassas or Bull Run, a Confederate victory. He took command of the main Confederate army protecting Richmond, but was ranked fourth in seniority among officers, which renewed a feud between Johnston and Confederate President Jefferson Davis, which would last the entire war. In May 1862, Johnston fought Union Gen. George McClellan to a draw at the Battle of Seven Pines or Fair Oaks, and was seriously injured and replaced by Robert E. Lee. He was appointed to overall command in the Western Theater, but had little operational control, and Federal forces defeated Confederates at Vicksburg and pushed them out of Tennessee. In December 1863, he took command of the demoralized Army of Tennessee, and built it back into fighting shape. Ordered to go on the offensive against Sherman's army, Johnston instead fought defensive battles during the Atlanta Campaign, with the strategy that his outnumbered forces could even the odds by inflicting greater casualties on attacking Federals. Dissatisfied with Johnston's failure to stop Sherman before Atlanta, Davis replaced him with Gen. John Bell Hood on July 17, 1864. Johnston returned to the field in February 1865 with the remnants of the Army of Tennessee, now wrecked by Hood's command, to oppose Sherman's march through the Carolinas. Against Davis' wishes, he surrendered to Sherman on April 26, 1865 at Durham Station, North Carolina, 17 days after Lee had surrendered to Grant at Appomattox Court House, Virginia. After the War, he served one term in Congress and wrote his memoirs. He died in 1891, after catching pneumonia while standing bareheaded in the rain at the funeral of his respected battlefield opponent and old friend, William T. Sherman.