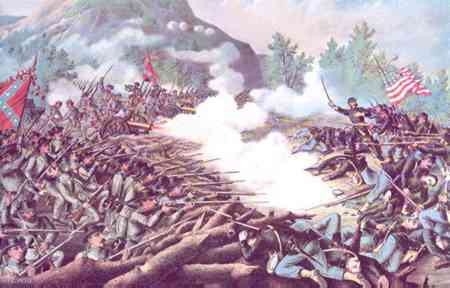 The Atlanta Campaign of 1864, the Union's attempt to de-stroy the Army of Tennessee and capture Atlanta, had progressed steadily south from Chattanooga across northwest Georgia until late May, when Union Gen. William T. Sherman's men stalled with defeats near Dallas. Frustrated with attempts to swing south around Johnston, Sherman moved back north to Acworth near his rail line, and Johnston extended his line from Brush Mountain southwest to Lost Mountain to block Sherman's route to Atlanta. All along, Confederate Gen. Joseph Johnston's strategy had been to entrench his numerically inferior forces in superior defensive positions and hope Sherman would chew up his numerical advantage in futile attacks. Sherman had not cooperated, attempting flanking maneuvers which had resulted in Confederate retreats. Sherman extended his lines southward until June 19, when Johnston pulled back to Kennesaw Mountain. Probing southward, Sherman again tried to flank the Confederate left. Johnston responded by sending Gen. John Bell Hood and 11,000 men to Kolb's farm, where on June 22, Hood's men savagely attacked Union generals Joe Hooker and John Schofield's troops unsuccessfully. Union batteries with more than 40 cannon fired solid shot into the Rebels, resulting in more than 1,000 Southern casualties compared to 350 Yankees.

After the month-long deadlock, Sherman, frustrated with trying to flank Johnston, decided on a frontal assault for June 27, hoping for a decisive battle, possibly thinking Johnston was expecting another flanking move or perhaps worried that his troops were getting too used to going around rather than directly at the enemy. Sherman would demonstrate on both flanks, and send Gen. George Thomas' Army of the Cumberland at the center and farther north, Gen. James McPherson's Army of the Tennessee. Thomas' men were mowed down attacking Cheatham Hill, defended by C.S. Maj. Gens. Patrick Cleburne and Benjamin Franklin Cheatham. Mc-Pherson's men did no better. At the end of day, the Union had lost 3,000 men and the Confederates 1,000. However, Schofield, demonstrating at the southern end of the line, had gotten around Johnston's left flank and made headway toward the Chattahoochee River, the last natural barrier before Atlanta, providing an opportunity for another Sherman flanking maneuver. It was only a matter of time. Johnston, on July 2, had to pull back from Kennesaw Mountain.