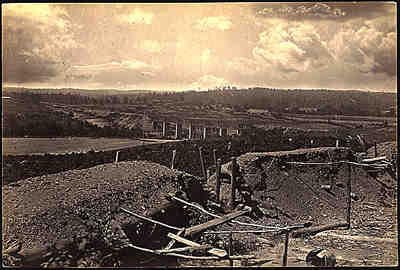 The Smyrna area was where Confederate Gen. Joseph Johnston retreated after he was forced to abandon Kennesaw Mountain, when Sherman's forces under Gen. John Schofield threatened Johnston's southern flank July 3-9, 1864.

Little remains of Johnston's bold stand in front of the Chattahoochee River during the Atlanta Campaign, called by historians Johnston's River Line. Unique and innovative fortifications, called "Shoupades" after their designer C.S. Gen. Francis A. Shoup, were painstakingly built along a high ridge in front of the river. They were mostly misunderstood by the Confederates, who stood to gain from their use. Slaves were used to build these fortifications, which were designed to create interlocking fields of fire. Instead of digging in for protection, these fortifications were above grade to create both defensive and offensive opportunities. Some experts believe them to be the most formidable defensive position taken by an army during the entire War. Gen. Hood urged they be abandoned, but Cleburne believed them to be excellent. The river line was abandoned when Union troops found river crossings elsewhere. The Shoupades and artillery forts have mostly been destroyed by development. Some remain on private property. One Shoupade and artillery fort are located on property deeded to Cobb County and may become a River Line park. Drive along Oakdale road, which follows the ridge of the river line, and you get a sense of Johnston's position. 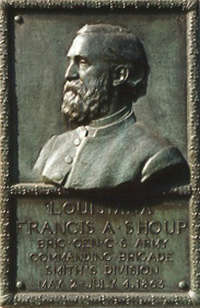 In the Atlanta Campaign, Confederate Gen. Joseph Johnston entrenched his army in front of the Chattahoochee River, called the River Line, hoping to prevent U.S. Gen. W. T. Sherman from crossing this last natural barrier before Atlanta. Sherman, as was his style, decided to go around Johnston, and sent cavalry under Gen. Kenner Garrard north to Roswell. A detachment from the cavalry burned the Marietta Paper Mill on Sope Creek on July 5, 1864, while guarding the Federal left flank which was preparing to cross the Chattahoochee River at Sope Creek. Union soldiers under Gen. Schofield crossed over a Cherokee fish dam on July 8 and secured the other side. Johnston was forced to abandon his river line on July 9 and withdraw over the Chattahoochee River. The impressive, stone papermill ruins are located on public grounds in the Chattahoochee National Recreation Area.

Several structures here were involved in the Civil War, including Ruff's Mill, the miller's house, and the Concord Woolen Mill. Federal troops moved through here after Johnston pulled back from Kennesaw Mountain during the Atlanta Campaign. Confederates set up a double line of field works approximately along Concord and Smyrna/Roswell roads, and two skirmishes occurred here on July 4, 1864; one to the east 1-1/4 miles called the Battle of Ruff's Mill, and another two and 1/4 miles farther east along this road called the Battle of Smyrna. Look for historical markers along this route. Union soldiers burned the mills and covered bridge, which was later rebuilt in 1872 and is still in use. The mill ruins are on private property.