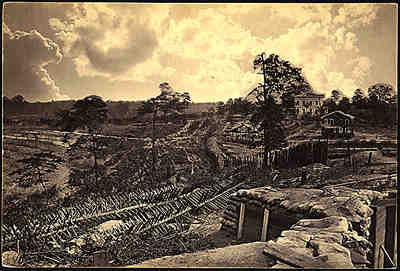 Antebellum Roswell was a New England-style village centered around the cotton and woolen mills of the Roswell Manufacturing Company. Founded in 1839, the town's mills played an important role in supplying goods such as the "Roswell Grays" to the Confederacy. When Union Gen. W. T. Sherman's 100,000-man army arrived in the general area during the Atlanta Campaign the first week of July 1864, his Confederate opponent Gen. Joseph Johnston entrenched his 65,000 men in front of the Chattahoochee River southwest of Roswell. Sherman decided to go around Johnston by looking for a river crossing north of his River Line. Sherman sent Gen. Kenner Garrard's 4,000 cavalry 12 miles north to Roswell to see if they could cross at a covered bridge there. On July 5, a skirmish erupted between the Union and Confederate soldiers at the bridge. Outnumbered Confederate soldiers under Capt. James R. King, burned the bridge and pulled back across the river. On July 9, Federal soldiers waded across the river at "Shallowford" and attacked Confederates on the other side, driving them back and securing the crossing, causing Johnston to pull back to the Atlanta side of the river. More than 36,000 Union troops occupied Roswell, and Sherman ordered the Roswell mills burned and the workers and managers deported to Indiana, but did not burn other private property. Two bridges were built by Dodge, and from July 13 to 17, Gen. James McPherson's corps crossed and marched to the Battle of Atlanta. At the Roswell Historic Visitors Center, a walking tour of Roswell's historic district is available, guiding you to more than 31 sites, some with Civil War significance, including Roswell Presbyterian Church on Mimosa Blvd., used as hospital.

Bulloch Hall, built in 1840, is one of the most significant houses in Georgia. Constructed from hard, heart of pine, this Greek Revival mansion was the home of Mittie Bulloch, the mother of 25th U.S. President Theodore R. Roosevelt, Jr. Her other son was the father of Eleanor Roosevelt, who married her fifth cousin and 31st President Franklin D. Roosevelt. Mittie's father, Maj. James S. Bulloch, was a naval agent for the Confederacy. The house was used as Federal barracks during the Union occupation of the town.

Chattahoochee River water power caused Roswell King to establish a town here in 1837 called Roswell. By 1839, he had a cotton mill in operation. By 1853, two cotton mills, a woolen mill, flour mill, and tannery were in operation, employing 250 workers. In 1864, Union Gen. Sherman's cavalry entered the town and established law and order. The mill owners had fled the town the night before loaded down with gold, and millworkers and others were looting the stores, mansions, and mills. In an effort by owners to save the mills from Sherman, owners deeded the mills to a defiant Frenchman named Theopholie Roche, who ran up a French flag and claimed the mills to be neutral French property. His claim irritated Sherman, who recognized it as a ploy, and he told his commanders to burn the mills and send the managers and workers to the North. Concerning Roche, he ordered, "Should you, under the impulse of anger, natural at contemplating such perfidy, hang the wretch, I approve the act beforehand." Roche avoided hanging, and in 1882 sued the U.S. for $125,000 claiming false arrest and damage of his property. He lost his suit. Mill workers lived at the Old Bricks, erected in 1839 and believed to be the first apartments in the South and the oldest in the U.S. They served briefly as a hospital for wounded Federal soldiers in 1864. The mill ruins are located nearby in the steep Vickery Creek gorge.