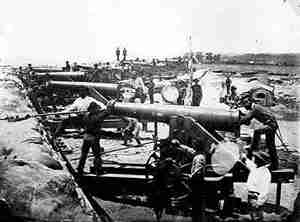 The Battle of Atlanta

The Battle of Atlanta on July 22, 1864 was the largest, bloodiest and perhaps most closely fought battle of the Atlanta Campaign, with 3,700 Union and 7,000 Confederate casualties. Although Hood had suffered a defeat two days earlier at Peachtree Creek, he had not lost any of his ambition or aggressiveness. His battle plan was to lure Gen. James B. McPherson's army, the Army of the Tennessee, located east of Atlanta on the Georgia Central Railroad, closer to Atlanta, while he sent Gen. William Hardee's men on a 15-mile flanking maneuver to strike at McPherson from the rear or flank, and Wheeler's cavalry to Decatur to cut McPherson's supply lines. Once attacked, McPherson would turn to fight, and Maj. Gen. Benjamin Cheat-ham's men would attack McPherson's center. As luck would have it, McPherson, worried about his left flank, had placed reserves under Maj. Gen. Grenville Dodge squarely in the path of Hardee's surprise attack. When it came, the fighting was bloody and vicious, with Cleburne's Division making charge and countercharge against the Union line, finally breaking through, until 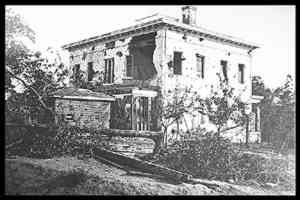 a battery of ten Federal artillery pieces beat back the assault. Cleburne lost 40 percent of his men and 30 of 60 officers in this battle. McPherson, checking on firing in this area, was shot from his horse and carried back to Sherman, who wept at the sight of his dead friend. Confederate Gen. William H.T. Walker was killed by a skirmisher near this area at the beginning of the battle and Georgia Gov. Joe Brown's brother was killed in this battle. Meanwhile, at the center of the Union line, Cheatham had broken through and was rolling up the line, routing four Union regiments which found themselves fighting in two directions. Sherman, his headquarters located dangerously close to the fighting, ordered 20 massed cannons to fire on the gap, turning the charging Confederates to pulp. A counterattack from the Yankees, under Gen. John "Black Jack" Logan who replaced McPherson, returned the trenches to the Union and sealed the gap, thus decisively turning the battle in the Federals' favor. After eight hours of continuous fighting, the battle was over.