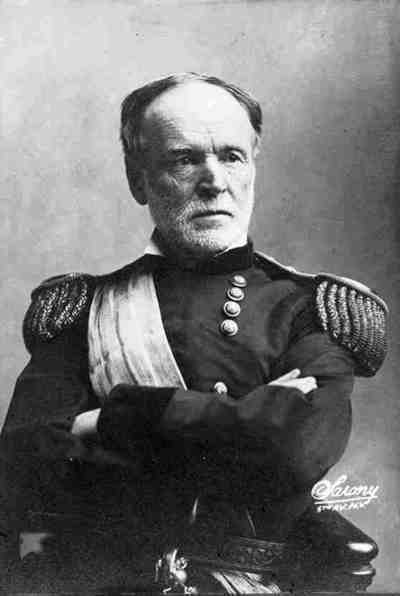 Decatur, a railroad town and county seat of DeKalb County, was on many Georgia maps before Atlanta grew into a larger city. Unlike their neighbors in Fulton County, a majority of DeKalb citizens voted not to secede in the election of Jan. 2, 1861. But their Union sympathies wouldn't spare them the ravages of war. During July 1864 of the Atlanta Campaign, Sherman found Atlanta's fortifications "too strong to assault and too extensive to invest," so he switched to a strategy of destroying the railroads which kept the town supplied. His first target was the Central of Georgia Railroad, which connected Atlanta with Augusta and the Eastern Theater. Destroying this transportation line would prevent supplies and reinforcements from coming to Hood's support. Cavalry raids and McPherson's army came through Decatur, occupying the town and tearing up tracks and burning bridges east and west. During the Battle of Atlanta on July 22, 1864, Confederate cavalry under Maj. Gen. Joseph Wheeler attacked Union Gen. McPherson's wagon train near the Decatur courthouse, driving the Union troops and the Chicago Board of Trade & Michigan batteries back up the North Decatur road. From here, Wheeler left to join the Battle of Atlanta raging west of Decatur down the rail line. An engraved stone on the loop in front of Main Hall on the Agnes Scott College campus indicates the site of the Decatur engagement.

DeKalb County history is the main focus of this museum, but it contains an interesting permanent exhibit, "Johnny Reb and Billy Yank: The Life of the Common Soldier" with various artifacts including Confederate surgical tools which contain traces of blood.

The Swanton House, circa 1825, is the oldest building in Decatur, and was the headquarters of Union Brig. Gen. Thomas W. Sweeny during the Civil War. Bullets are embedded in the wall. Visitors must call the DeKalb Historical Society in advance to arrange a tour of the home. Located next door is the Mary Gay House, where Mary Ann Harris Gay lived from 1850 to 1914. Her personal account of the War, Life in Dixie During the War, vividly describes the events of those years and was a major source for Margaret Mitchell's Gone With The Wind. The house is open for self-guided tours.