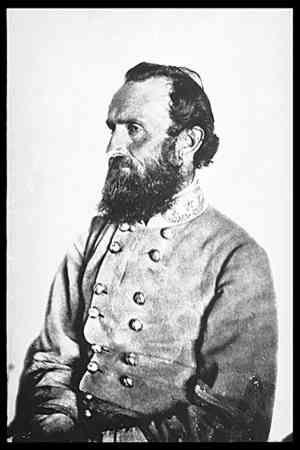 The 3,200-acre Stone Mountain State Park features the world's largest carving, a memorial to three heroes of the Confederacy, Confederate President Jefferson Davis, and Generals Robert E. Lee and Thomas J. "Stonewall" Jackson. The carving, larger than Mount Rushmore, took more than 57 years and three main carvers to complete, from conception to finishing touches, due to delays and lack of funds. Started by Gutzon Borglum, the carver of Rushmore, disputes between him and the monument association ended his commission. In 1958, the state took over the project which was eventually completed in 1972. The carving is much larger than it appears: sculptors could stand inside a horse's mount to escape a sudden shower. Also at the Park is Memorial Hall museum, which contains one of the largest Civil War exhibits in the state. At Confederate Hall is a huge diorama explaining Civil War events in Georgia and statues of famous Confederates. You can walk to the top of the mountain from Confederate Hall or take a tram near Memorial Hall. Also found at the park is an old grist mill and an authentic antebellum plantation complex consisting of 19 restored buildings. The Park offers golfing, lodging, conference center, camping, fishing, swimming, and watersliding. Stone Mountain's Antebellum Festival, held each year on the last weekend in March, features a Civil War encampment and reenactment. In nearby Stone Mountain Village is Stone Mountain Confederate Cemetery with the graves of approximately 150 Confederate soldiers, who died in nearby hospitals or were killed in a skirmish with Federal raiders under Gen. Kenner Garrard who destroyed the railroad here on July 18-19, 1864.