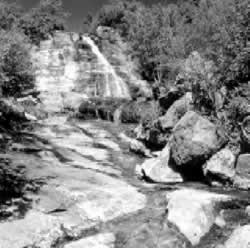 Though the Balsam Mountains section [Fig. 22] is geographically smaller than others in this book, it is chock full of natural bounty. It is bordered by the Great Smoky Mountains National Park to the northwest and South Carolina just east of Tryon to the south. Two almost-parallel lines run southeasterly from the park to the border, one running south of Asheville and the other between the towns of Cherokee and Maggie Valley.

The Balsam Mountains have at least seven forest types, in most part due to the variety of elevations found here, ranging from bogs found at lower elevations to spruce-fir on Balsam Knob topping out at 6,410 feet. A number of factors affect the development of these forests. The geology, for example, determines mineral content and thickness of the soil which in turn determines the species that can grow there. Topography affects what grows where: south-facing slopes, for instance, tend to be drier because the day-long presence of the sun evaporates soil moisture. On the other hand, north-facing slopes are more shaded and therefore more moist, but they take the brunt of sharp, cutting winds that impact the size and type of vegetation. Elevation and annual precipitation are also factors.

The cove hardwood forest develops in protected coves with damp soils, generally at low and middle elevations. The conditions here are ideal for an amazing diversity of trees—as many as 40 species in one forest. A sampling of the trees in the cove hardwood forest include yellow birch (Betula lutea), yellow buckeye (Aesculus octandra), sugar maple (Acer saccharum), yellow-poplar (Liriodendron tulipifera), and black cherry (Prunus serotina).

The floodplain forest, unique in Western North Carolina to the Asheville and French Broad River area, is related to the cove hardwood forest. It includes river birch (Betula nigra), box elder (Acer negundo), and American sycamore (Platanus occidentalis), among others, along the river banks.

One of the driest forests, the oak-pine forest, grows in thin and sandy soil that does not produce the lush vegetation usually so prevalent in the mountains. Blueberry bushes (Vaccinium), mountain laurel (Kalmia latifolia), and a limited number of hardy wildflowers are sufficiently drought resistant to grow here. Pines also grow well in dry conditions in part because their waxy needles conserve water. But they cannot tolerate shade. Once the canopy becomes dense, pines are replaced by the dominating oaks.

With its diverse trees and understory, the northern hardwoods forest resembles those forests found in New York and New England and features species common to the northern regions. Trees include yellow birch, yellow buckeye, and beech, among others. At Steestachee Bald, milepost 437.6, evidence of the yellow birch's ability to root in mossy boulders is evident. A variation on the northern hardwood forest, orchards, occurs when northern red oaks dominate areas where harsh weather stunts trees in ways that make them look like fruit orchards. An example of this is at Frying Pan Gap, milepost 409.6, just south of Pisgah Inn.

As discussed in the Black Mountains section, spruce-fir forests are only found at higher elevations and higher latitudes in places such as New England and Canada. As the name implies, the two main species are red spruce (Picea rubens) and Fraser fir (Abies fraseri) which dominate the summits.

Spruce appears at 4,500 feet elevation while the fir requires another 1,000 feet elevation before it can grow. In the Balsam Mountains, the highest overlook along the Parkway—Richland Balsam, milepost 431.4—and Devil's Courthouse Overlook, milepost 422.4, offer access to this forest type.

Finally, the tundralike bald is one of the most unusual environments in the mountains of North Carolina. Balds are defined as high-altitude, open areas devoid of trees occurring as either shrub-dominated areas or tundralike grasslands at or near the summits of the highest mountains at the edges of Canadian zone spruce-fir forests. Balds are enigmatic because no one seems to know how they were formed or why they persist. Although ecologists have offered many theories for the persistence of balds, no one theory has been universally accepted.