The Blue Ridge Parkway in the Balsam Mountains

Traveling from the French Broad River south to approximately milepost 440, this stretch of the Blue Ridge Parkway passes through 11 of the 25 tunnels in North Carolina and reaches its highest point at Richland Balsam Overlook, milepost 431.4, elevation 6,053 feet. Perhaps the most pronounced feature along this section of the Parkway is a long chain of overlooks stretching along the ridges like a beaded necklace and offering breathtaking vistas of many of the nearby parks and attractions such as the Mills River Valley, Mount Pisgah, Looking Glass Rock, and Devil's Courthouse.

The French Broad River Overlook at milepost 393.8 [Fig. 23(1)] features a beautiful vista of the wide, north-flowing river on the outskirts of Asheville. This is a popular spot for residents and visitors when fireworks light up the sky on the Fourth of July and other holidays. The historic Shut-In Trail begins near here, as well. Late in the nineteenth century this trail led from George Vanderbilt's Biltmore Estate to his Buck Springs hunting lodge near Mount Pisgah. Years after the trail fell into disrepair, volunteers reclaimed it along a 16-mile stretch of the Parkway from the French Broad River to milepost 407.6 at the Mount Pisgah trailhead.

The 25 tunnels in North Carolina (plus one in Virginia) represent a total of 2.25 miles of mountain carving carefully blasted with air drills and explosives and painstakingly dug out and carried away. At Ferrin Knob, mileposts 400.9 to 401.5 [Fig. 23(2)], it took three tunnels to do the job right.

Cutthroat Gap at milepost 405.5 [Fig. 23(3)] is named for the sharp, wintry winds that local folks swear blow in direct from the North Pole. This gap also is called Elk Pasture Gap referring to a small herd that once grazed nearby after George Vanderbilt imported them from Yellowstone National Park.

Vanderbilt chose a site atop the mountain at Buck Spring Gap, milepost 407.7 [Fig. 23(4)], for the lodge where he entertained dignitaries and artists, authors and scholars, and presumably escaped from the rigors of running his 250-room chateau below. Although he and his cohorts hunted and fished here, they actually left the land in better shape than they found it. Overhunting had taken its toll by the late nineteenth century, but Vanderbilt restocked the land with white-tailed deer (Odocoileus virginia), wild turkey (Meleagris gallopavo), and trout. Their descendants thrive here today. 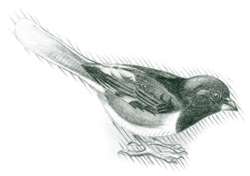 Just past the Mount Pisgah Recreation Area, Frying Pan Mountain Trail, milepost 408.8 [Fig. 23(5)], ascends to a fire tower that offers dramatic vistas highlighted early and late in the day by the glow of a sunrise or sunset. The trail is a moderately strenuous hike at 3.8 miles round-trip. Like most mountain tales, stories about how the mountain and corresponding gap got their names vary. One cites the oddly shaped spring nearby, and another claims a frying pan was always left hanging at the camping area favored by local herders.

Humans aren't the only ones to flock here in late summer and early fall. Thousands of migrating monarch butterflies (Danaus plexippus) pass through on their 2,000-mile migration to central Mexico to overwinter. The Cherry Cove Overlook, milepost 415.7 [Fig. 23(6)], offers an excellent vantage point for viewing their flight during the month of September. Birds flock here, too. It seems conditions in the moist cove 1,000 feet below are ideal for growing black cherry trees as tall as 100 feet—as much as twice their average height. The trees' small white blossoms turn to dark reddish-black fruit in July and August, providing a feasting paradise for many species of birds.

Silvermine Bald, near milepost 421 [Fig. 23(7)], was once the site of a 60-foot-deep silver mine shaft worked at the turn of the century. This mine was typical of other mineral mines in the region—more lure than lode—and was eventually abandoned.

Fauna figures prominently in life along the Parkway, and several overlooks pay them tribute. According to U.S. Geological Survey maps, the 3 miles across the Balsams between mileposts 427.6 to 430.4 host at least 10 mountains, coves, and streams named after the bear. Bear Pen Gap, Bear Trap Gap, and Bear Trail Ridge are three popular examples. Wolf Mountain Overlook, milepost 424.8 [Fig. 23(8)], recalls days when wolves still roamed the mountains. During the Civil War when men were busy fighting among themselves, wolves thrived. Unfortunately, after the war, soldiers became hunters and farmers again and extirpated the wolves. (See Red Wolf Restoration.)