[Fig. 28] Experienced backcountry travelers who know Middle Prong Wilderness value the secluded tract for what it lacks: designated campsites, blazed and well-maintained trails, and established picnic spots. The one sought-after amenity it does offer—almost without fail—is solitude.

In 1984, this 7,900-acre section of the Pisgah National Forest became a federally designated wilderness area, falling under the 1964 Wilderness Act. The designation preserves Middle Prong Wilderness in its natural, primitive state as more of a safe-haven for native plants and animals than a recreation spot for throngs of day-hiking visitors.

Throngs, in fact, are not allowed. The isolated nature of this wild environment is maintained in part by limiting groups to 10 people. Those who do use the area should be experienced hikers with the strong orienteering skills necessary to navigate unmarked routes safely.

In this central portion of the Richland Balsam Mountains, two rugged north-south trails intersect with a section of the Mountains-to-Sea Trail [Fig. 28(11)] at the southern edge of the area. Connections with trails leading into Shining Rock Wilderness to the northeast, just across the West Fork of the Pigeon River, are also possible, providing opportunities for lengthy backpacking and camping expeditions. 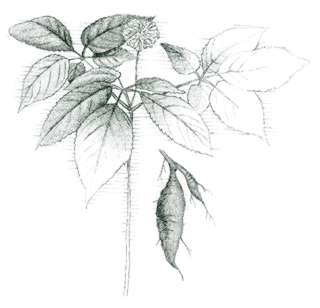 The Sunburst Campground and Picnic Area [Fig. 28(1)], situated on NC 215 approximately 9 miles west of the Blue Ridge Parkway, provides camping (with water and toilets) and picnic areas and serves as a base camp for treks into the wilderness. To hike Haywood Gap Trail [Fig. 28(4)], for example, start at the south end of the campground and continue 1.6 miles on FR 97; the route climbs two switchbacks and, after the third one, turns left off FR 97 onto a primitive path that crosses Little Beartrap Branch and soon enters the wilderness boundary. From here Haywood Gap Trail continues another 3.4 miles to the intersection with Buckeye Gap Trail [Fig. 28(12)]. Both trails connect with the Mountains-to-Sea Trail and travel through rhododendron groves and forests of birch, cherry, maple, beech, and the occasional spruce and fir. Adjacent to Shining Rock Wilderness Area, Middle Prong contains the highest peak within these two wilderness areas and the highest in the Pisgah Ranger District: Balsam Knob, which rises to 6,410 feet.

Since much of the area was logged in the early 1900s, the forests that exist in Middle Prong Wilderness today are primarily second growth. Sunburst, to the north, was a lumber town for Champion Fibre Company whose 10 camps harvested hemlock, poplar, and American chestnut. Parts of the old railroad and skid grades and logging equipment remain strewn throughout the area. The leftover symbols of human encroachment into this now wild landscape are protected by the Antiquities Act, which bans their removal.

Nine miles of trout streams flow through the wilderness. The West Fork of the Pigeon River is a medium-to-large, hatchery-supported stream with steeply sloping banks of craggy rock. Middle Prong, a smaller, clear Wild Trout Water stream, runs swiftly through the center of the area, keeping the waters cool enough to support the native brook trout.

Though Middle Prong Wilderness is much less heavily used than adjacent Shining Rock Wilderness, protecting the solitude and natural state that the Wilderness Act intended requires that visitors, no matter how few in number, make efforts to minimize their impact. No open fires are allowed, though camp stoves may be packed in. Recreational vehicles are also prohibited. Visitors typically do not bring electronic devices into the wilderness and strictly follow Leave No Trace camping techniques. 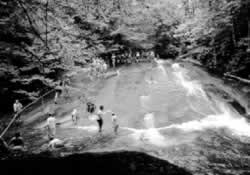 [Fig. 26(6)] Whether they were weaving river cane baskets or hand-crafting wooden dulcimers, Western North Carolina's early settlers drew on the resources of the mountains for every aspect of their lives. Each summer, adventurous kids and kids at heart still rely on natural resources for old-fashioned fun at Sliding Rock.

A cascade of 11,000 gallons of water a minute fuels this 60-foot rock water slide, emptying sliders into a 6-foot-deep pool in Looking Glass Creek. The 50-degree to 60-degree water temperature makes this cool mountain attraction one of the Pisgah National Forest's most popular spots at the height of summer.

Sturdy sliding gear (cutoff jeans are recommended) wears better than bathing suit material during the shoot down the slick yet somewhat rough surface. Those who want to completely avoid minor bumps and bruises can share in the exhilaration—and perhaps capture it on film—from the viewing platform at the base of the slide.

[Fig. 26(11)] Its glistening surface, whether reflecting the winter sun off a coating of ice or bouncing rays of light from its spring rain-drenched sides, makes Looking Glass Rock one of Pisgah National Forest's most striking landmarks. The towering structure is sought out by rock climbers, hikers, photographers, and sightseers alike.

This 3,969-foot granite dome is part of a larger mass called Whiteside Granite, a body of igneous rock formed 390 million years ago from crystallized magma nearly 14 miles below the earth's surface. Looking Glass, visible only in the last few million years, was carved into place as weather and water eroded the softer gneiss around it. An exfoliation process, which broke and stripped the surface of the dome according to concentric faults, caused the rounded shape.

A strenuous, 6.2-mile (round-trip) trail climbs through mixed hardwood forests and mountain laurel to the outcrop's crest, providing hikers with lofty views of the surrounding forest and the Davidson River Valley. In recent years, peregrine falcons have nested on Looking Glass following a reintroduction program. They may be spotted between mid-March and mid-September, with their greatest activity in March and April. Peregrine falcons nest underneath overhangs just above the tree line.

Several of Transylvania County's scores of waterfalls, caused by the area's erosion-resistant rock and its wide variations in elevation, tumble and crash nearby. Looking Glass Falls is, perhaps, the most visited with its easy access from US 276; Moore's Cove Falls and Sliding Rock are also along Looking Glass Creek. All are highly rated and thoroughly explored in Kevin Adams's book, North Carolina Waterfalls.

[Fig. 26(7,8)] Over the centuries in the southern Appalachians, rugged rock faces, forbidding overhangs, and serpentine pathways nearly enclosed by boulders have given rise to dark legends of evil spirits. Cherokee folklore names a rough outcropping in the Balsam Range as the inner sanctum of the Devil himself.

The bare summit that rises from the source of the French Broad River, according to the Cherokee, contains a cave in its bowels where the evil Judaculla held court, passing judgment on those lacking courage or virtue. (See Judaculla Rock.)

As if to substantiate the myth, a steep and taxing hike to the massive rock's storied peak passes through the skeletons of a Fraser fir forest where the trees have been all but destroyed by the balsam woolly aphid. The aphid was accidentally introduced to this area in the 1950s and has wreaked havoc on fir trees ever since. Once infested, most firs die, leaving behind only bare, gray snags as a grim reminder of the aphid's presence. Some scientists are encouraged, however, that the firs will be able to stage a comeback, as each new generation grows increasingly resistant to the menace.

The 360-degree view from the top presents very little sign of civilization, and the scene is majestic. Besides North Carolina, three states are visible—South Carolina to the south, Georgia to the southwest, and Tennessee to the west. Hawks, ravens, vultures, and occasionally eagles and peregrine falcons ride the hot air currents that rise from the valley. Rock climbing is also popular here.

Research into the size, weight, and numbers of the northern flying squirrel is regularly conducted in the higher elevations surrounding Devil's Courthouse. The endangered species, which averages 10 inches in length and 5 ounces in weight, lives on seeds, lichens, and mushrooms. Active mostly at night, the northern flying squirrel is rarely seen gliding through the air, using folds of skin running from its front to back legs much like a parachute with its tail as rudder.