Augusta, like Columbus and Macon, played an important role as a fall line industrial, transportation, and trade center for the Confederacy during the Civil War. Augusta was the location of the Confederacy's Powder Works Factory, which supplied the Southern states with badly needed explosive powder. Cotton is what shaped and supported Augusta in the antebellum and post Civil War years, giving its citizens wealth and importance.

Although no battle was fought here and Gen. W.T. Sherman's men didn't march through its streets on their way to the sea, much Civil War history is to be found in the Garden City. Augusta, the birthplace of "Fighting" Joe Wheeler, supplied many fighting men to the cause. Five hospitals were located here. Augusta is the second oldest city in Georgia, established in 1736 by Gen. James E. Oglethorpe as an Indian trading post on the Savannah River. It was the state's capital from 1785-95, and many of Georgia's historical "firsts" happened in Augusta. The oldest railroad in Georgia continuously operating under its original charter, the Georgia Railroad and Banking Company, carried more than 100,000 Confederate soldiers to their homes without charge after the War.

An excellent self-guided tour to the historic canal is available from the historic Augusta Cotton Exchange Welcome Center. This is the best way to tour the canal, which can be done on foot, by bike, or by canoe. Built in various stages starting in 1845, the canal was finished in the 1850s and is nine miles long and seven feet deep. This industrial improvement brought to Augusta needed power and water, vital to its manufacturing facilities, giving Augusta the nickname of the "Lowell of the South." Augusta's canal, water power, railroad facilities, and central location safe from attack made the city the ideal location for the Confederacy's Powder Works. A 168-foot obelisk chimney is all that remains from the Confederate Powder Works, which is the only permanent structure begun and completed by the Confederate government. The Powder Works Factory was the second largest munitions factory in the world during the Civil War, consisting of 26 buildings which stretched two miles down the first level of the Augusta Canal.

In July 1861, President Jefferson Davis ordered West Point-trained engineer, Col. George Washington Rains to select a place for a gunpowder plant, and Rains selected Augusta. The munitions factory operated under Rains from 1862 until April 18, 1865, manufacturing 2,750,000 pounds of gunpowder of the highest quality then made from saltpeter smuggled through the Federal blockade from India via England. Rains was known to boast that no battle was lost for want of gunpowder. The factory also produced cannons, cartridges, percussion caps, grenades, and signal rockets. Churches donated their bells, and local women donated their lead window weights to be melted into bullets. Other war industries along the canal produced pistols, uniforms, shoes, bedding, hospital supplies, baked goods, and gun and horse harnesses.

The city bought the dilapidated powder works from the U.S. government in 1872 and tore down the mills to make way for new industries. Col. Rains, then a professor of chemistry and pharmacy at the Medical College of Georgia, appeared before the city council requesting that "at least the noble obelisk be allowed to remain forever as a fitting monument to the dead heroes who sleep on the unnumbered battlefields of the South." Large stone tablets on the base of the chimney pay tribute to the fallen Confederacy and Rains, who "under almost insuperable difficulties erected, and successfully operated these powder works — a bulwark of the beleaguered Confederacy."

The Cotton Exchange building, built in 1886, serves as a museum for King Cotton and a Welcome Center. At the height of the cotton boom, Augusta was second only to Memphis in the volume of cotton trade. This is a good place to begin your tour of Augusta, with tour brochures and maps available. Notice the 45-foot long wooden blackboard, discovered behind a wall during renovation, still chalked with cotton, currency, and commodities prices dating back to the early 1900s.

Now the Augusta College Campus, this land served as an U.S. arsenal for more than 128 years. First commissioned by President George Washington in 1793, the first arsenal was located near the river in 1816, near where the future Confederate Powderworks was to be located. It moved to its current location in 1826 to escape the Black Fever which struck the garrison. During the Civil War, the arsenal manufactured a variety of ordnance for the Confederate Army. The original barracks, jail house, cannons, and headquarters building remain on campus. Notice the headquarters sign with two crossed cannons at Payne Hall and the gun ports in nearby walls. The commandant's house was the boyhood home of poet and novelist Stephen Vincent Benet, best known for John Brown's Body, 1928, which won a Pulitzer Prize for poetry. Over 300 pages, the poem covers the Civil War from John Brown's raid at Harpers Ferry, W.Va., to peace at Appomattox. The arsenal, with its garrison of 80 men commanded by Captain Arnold Elzey, was surrendered to Georgia troops on Jan. 24, 1861, five days after the Secession convention in Milledgeville. It was abandoned in 1955.

Nearby on the Augusta College grounds, on the east side of Arsenal Ave., is the private family cemetery containing the grave of Augusta native Maj. Gen. William H.T. Walker, who was killed by a sharpshooter at the Battle of Atlanta on July 22, 1864. Walker had served in the Indian and Mexican wars, taught cadets at West Point, and as a general saw action in a wide variety of locations, including Virginia, Florida, Vicksburg, Chick-amauga, and all the battles in Georgia during the Atlanta Campaign until his death.

This is the tallest, one of the oldest, and one of best Confederate county monuments in the state. The 76-foot tall monument features a private at the top and generals at the bottom. The private is modeled on the likeness of Sgt. Berry Benson, who leans on his rifle, wears a kepi, and faces east from his perch of Italian Carrara marble. Benson was a Georgia scout and sharpshooter, who was captured more than once but escaped every time, and lived until New Year's Day 1923. On the bottom are fine sculptures of generals Robert E. Lee, Thomas "Stonewall" Jackson, T.R.R. Cobb, and William H.T. Walker. The monument rests on a stepped 22-feet square base of Georgia granite. Dedicated on Oct. 31, 1878, the monument cost $17,313.35, a very large sum in those days. Alexander Stephens was in Augusta for the ceremony, but was too sick to attend. A grand parade was held with many battle-scarred regiments and dignitaries, including Stonewall Jackson's widow and then governor, Gen. Alfred Colquitt. Gen. Clement A. Evans spoke, the first recorded appearance of the "Reverend General" who would be speaking at monument dedications in Georgia for the next 30 years. On one side is perhaps the most common inscription on Georgia's Confederate monuments, first used here in Augusta: "No Nation Rose so White and Fair: None Fell So Pure of Crime."

The first monument in Richmond County to Confederate soldiers is in Green Street Park, a 20-foot obelisk erected in 1873 to memorialize 24 Sunday School members killed in the War. On the shaft and on its base are an additional 290 names of Richmond County war dead.

Established in 1816, this 60-acre cemetery contains the remains of 337 Confederates buried near a fountain, who are believed to have died of battle wounds or disease in the five hospitals located in Augusta. To the middle left of the fountain are the graves of four unknown soldiers. Directly behind this section are the graves of Capt. G.W. Rus and Lt. N.E. Levy, both who died at the Crater at Petersburg, Virginia. The General's Walk, located to the right of the Confederate Cemetery, has seven headstones and a plaque which memorializes seven Confederate generals whose graves are interspersed throughout the cemetery, which is tied with Oakland in Atlanta and second to Laurel Grove in Savannah for most generals. The generals buried in Magnolia Cemetery are Edward P. Alexander, Goode Bryan, V.J.B. Girardey, J.K. Jackson, William D. Smith, Marcellus A. Stovall, and Ambrose R. Wright. To the left of the General's Walk are the graves of 13 Union soldiers. The fortified east wall of the cemetery has patches where cannon were once placed.

The Richmond Academy is a Gothic Revival style structure completed in 1801, which served as the oldest chartered school south of Virginia. Lt. Gen. James Longstreet attended school here to prepare for West Point. The Academy was used as a Confederate hospital after Chickamauga in 1863 and was occupied by Federal troops until 1868. From 1930-95, it served as the Richmond County Museum. Beautiful Presbyterian Church was built in 1809, as designed by Robert Mills, the creator of the Washington Monument and U.S. Treasury Building in Washington, D.C. The church was used as a hospital and temporary prisoner of war camp during the Civil War, and its pastor from 1858-70, an ardent secessionist, was the Rev. Joseph R. Wilson, the father of President Woodrow Wilson. The future president's boyhood home is under renovation and is available for tour. As a boy, Wilson saw Confederate President Jefferson Davis and his retinue taken through Augusta en route to prison at the end of the War. Springfield Baptist Church, founded in 1787, is believed to be the oldest independent black church on its original site in the U.S. The church was formed for blacks, by blacks, and was a place of worship for "free slaves." In 1866, the Georgia Equal Rights Association was founded at Springfield, as was Morehouse College in 1867.

The new history museum, scheduled to open in Feb., 1996, has displays on Augusta's Civil War history, including uniforms, weaponry, photos, paintings and a mural depicting Sherman's "March to the Sea." The new art museum has a gallery featuring Civil War art.

This Greek Revival building, designed by nationally renowned Georgia architect, Charles B. Cluskey, was the first medical school in Georgia, completed by 1835. It was used as a Confederate hospital during the War. Tours by appointment. 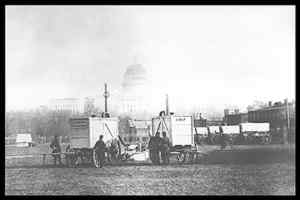 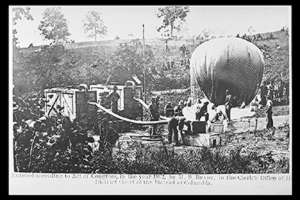 The U.S. Army Signal Museum offers one of the most complete and comprehensive collections of communications material in existence in the U.S. The U.S. Signal Corps, a separate branch of the army born of necessity during the Civil War on March 3, 1863, played a key role in the conflict through the use of wig-wag flags, signal balloons, and telegraphs. The Battle of Kennesaw Mountain is reportedly the first time an army used telegraphs to communicate between generals for the movement of troops. Civil War exhibits include the personal items of Albert J. Myer, the father of the Signal Corps and inventor of the wig-wag system of communication, a beardslee Magneto, Confederate Signal Corp items, and other artifacts and displays.