Washington County, created in 1784, claims to be the first county named for George Washington. It was located on the stagecoach route between Louisville and Milledgeville before the advent of railroads, and became an important cotton producing county in the 19th century, with a short railroad spur connecting it to the Central Railroad at Tennille. Sandersville suffered when Gen. W.T. Sherman and his entire Left Wing marched into town early in the morning on Nov. 26, 1864, but it almost was worse. His Left Wing had split after Milledgeville, but now it converged on two separate roads just outside of town. The night before, C.S. Gen. Joe Wheeler's cavalry had galloped into town with 13 prisoners, a dozen of which he placed in an improvised barrack in a store and one which was taken to the Methodist parsonage and placed in the care of by the Rev. J.D. Anthony. Around midnight, an unknown vigilante mob subdued Wheeler's sentries, seized the prisoners, and took them out to a field, and shot them. Local citizens, fearing Sherman's wrath, quickly buried the bodies before sunrise. The next morning, Wheeler's cavalry briefly skirmished with the Union troops as they approached the town, firing from the court house and other buildings, before saddling up and heading out in the opposite direction.

When Sherman reached town and learned of the skirmish and execution of Federal prisoners, he decided to burn the town of 500 to the ground. The Rev. J.D. Anthony pleaded with the General to spare the town, asserting that Confederate vagabonds killed the prisoners, and Wheeler's men — not the town — fired on Federal troops. The Rev. Anthony informed Sherman that only four men — three old and feeble — were left in town, the rest of the citizens were women and children. (Of Washington County's 1,460 eligible men, 1,502 signed up in 15 different Confederate companies (some signing up twice), perhaps the best record in the Georgia and maybe the South.) Something the Rev. Anthony said must have convinced Sherman, because he only burned the courthouse and downtown district, four cotton warehouses, and destroyed track. Worse, his men looted the county of all available food, creating hardship for the Georgians. But they were spared their homes. On Nov. 27, the Left Wing left town moving toward Louisville, and 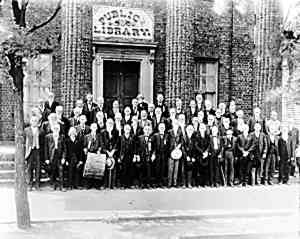 Sherman switched to the Right Wing in Tennille. Jefferson Davis, in his flight at the end of the War, arrived in Sandersville about noon on May 6, 1865, where the last official business of the Confederate States Treasury was transacted.

Today, you can visit the county museum, located in an 1891 sheriff's house and jail, which has on display the couch Sherman slept on the night he stayed in Sandersville; a trunk belonging to William G. Brown (veteran of Gettysburg, The Wilderness, Spotsylvania, Cold Harbor, and many other battles), who owned the house Sherman used as his headquarters in Sandersville; and many other interesting Civil War artifacts. In 1989, the Washington County Historical Society purchased the Brown House, circa 1854, and is renovating it now with plans to move the museum into this historic home. A monument to Jared Irwin of Washington County, an early governor, is located in front of the current courthouse and reportedly bears scars from the firefight when Sherman came to town. An unmarked, bricked over tomb in the old city cemetery reportedly contains the remains of the executed Yankee prisoners. Note the old roadbed in the cemetery where the Union marched into town. The Historical Society has a guide to Sandersville with 36 historic sites, and another guide to the homes designed by architect Charles E. Choate.