The activities in this area involved the crossing of the Ogeechee River — the last major natural barrier before Savannah — by Sherman's Left Wing on his "March to the Sea," and a series of running cavalry battles between C.S. Gen. Joe Wheeler and U.S. Gen. Judson Kilpatrick, known as the Battle of Waynesboro. Sherman's plan was to feign at Macon with his Right Wing and feign at Augusta with his Left Wing, causing Confederates to organize defenses there, and meanwhile to march to Savannah to resupply his 60,000 troops. The first duty of Kilpatrick's cavalry was to protect the Right Wing and convince Confederates they were moving on Macon. In doing this, he encountered Wheeler's cavalry in a series of light skirmishes. When the Right Wing was past Macon and on its way to Savannah, Kilpatrick was ordered to circuit the Left Wing to the north and ride to Camp Lawton, a huge Confederate prison near Millen, to free the prisoners there, and threaten toward Augusta, creating the illusion that it was the next Federal objective. On his way to Millen, Kil-patrick had been bested in a series of hot cavalry fights with Wheeler in Burke County from Nov. 25-28, 1864, then he retreated to Louisville. When he returned, he brought two brigades of infantry from the Left Wing, and drove Wheeler north out of Waynesboro in battles from Dec. 2-4. Union bummers destroyed the town before Sherman's Left Wing marched through the county. In Augusta, only 25 miles north of Waynesboro, C.S. Gen. Braxton Bragg waited with 10,000 men for Sherman's approach, which never came, as the Left Wing and Kilpatrick turned to their true objective of Savannah. Today, Waynesboro has a county museum with Civil War artifacts; a county monument to the Confederates, memorializing the dead in the city cemetery; and a historic plantation home which was the site of a cavalry skirmish. The Burke County Courthouse, guarded by Civil War cannon, dates to 1857. It was partially destroyed by Kilpatrick's men but repaired. In Louisville stands reportedly Georgia's only remaining slave market, built between 1795-98. Known as the Market House, this fascinating, hand-hewn oak structure bore witness to many public economic events, including the sale of cotton, property, and slaves. The bell in the cupola was cast in France in 1772 and bound for a New Orleans Convent, when it was hijacked by pirates and sold in Savannah. The Market House stands in a square that was the hub of transportation routes when the State Capital was located here from 1794 to 1807. Louisville was the home of noted statesman, Sen. Herschel V. Johnson. 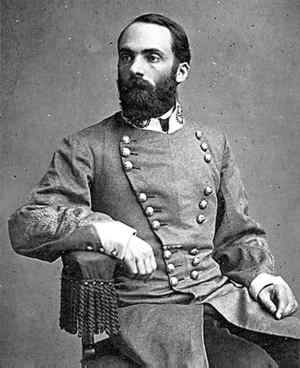 The county museum is located in the antebellum home just off the main square. Civil War artifacts include cannonballs, shotguns that Gen. Sherman's men used, and a historic photograph of the first group of men to leave Burke County to fight for the South.

The cemetery has the remains of 45 Confederate soldiers who died fighting Sherman's men in Burke County. Twelve are unknown. In the center of the graves is the Burke County Confederate Monument, a 15-foot shaft made of granite, dedicated on April 26, 1878, at the cost of $375.

This historic plantation home, established from a royal grant from King George III in 1767, was the scene of a cavalry skirmish Nov. 27-28, 1864, between Wheeler and Kilpatrick's cavalry, as Wheeler pushed the Federals back from Waynesboro. The private residence, believed to be built in the 1760s, has three holes made from minie balls fired during the battle. The soldiers who died here were buried behind the house. The Union dead remain, but the Confederates were reinterred in the Waynesboro Confederate Memorial Cemetery.