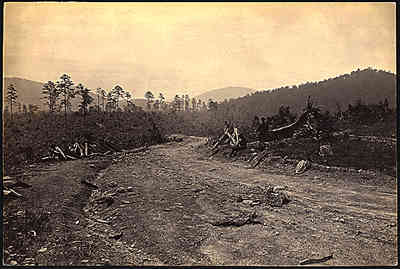 Dalton was the winter camp of Gen. Joseph E. Johnston 's Army of Tennessee in 1863, the place where the second main army of the Confederacy had its morale restored to health after the disaster at Chattanooga under Gen. Braxton Bragg. Dalton was also the Confederate headquarters when U.S. Gen. W.T. Sherman opened the Atlanta Campaign in May 1864 with the battles near Rocky Face Ridge, including the battle of Rocky Face Ridge, Buzzard's Roost (or Mill Creek Gap) and Dug Gap. Johnston's army had to retreat south when threatened on their flank near Resaca.

Dalton was an important railroad town on the Western and Atlantic Railroad which connected Chattanooga with Atlanta. A northern line, the East Tennessee and Georgia, connected east Tennessee with Dalton. Also an important hospital town, Dalton had four buildings dedicated to caring for the wounded and sick; and the "Great Locomotive Chase" came through here. With 32, more Civil War historical markers are found in Whitfield County than any in other county in the state.

Dug Gap Battlefield Park, located on a rocky ridge, is a great place to see the difficulty of fighting on this steep terrain. A path leads to a 1,237-foot long segment of the stone breastworks which protected outnumbered Confederates who successfully held off Union attacks Feb. 25 and May 8, 1864. The Confederates used not only bullets but huge boulders, which they rolled down on screaming Federals.

Built in 1848 by Ainsworth Blunt, Dalton's first mayor, the Blunt House was used as a Union hospital in 1864. The house is on the National Register of Historic Places and owned by the Whitfield-Murray Historical Society. Call 706-278-0217 for information. The Cook (Huff) House was Confederate Gen. Johnston's headquarters during the winter of 1863-64 and was the scene of C.S. Brig. Gen. Patrick Cleburne's controversial proposal to emancipate and arm slaves to assist the southern cause.

This is reportedly the only statue in the country dedicated to Confederate Gen. Joseph E. Johnston . On the Register of National Historic Places, it was erected in 1912 by the United Daughters of the Confederacy.

From 1862 to Sept. 1863, when hospitals were relocated farther south, four main Confederate hospitals treated the injured and sick. West Hill contains the remains of 421 unknown and four known Confederates and four unknown Union soldiers. Some died in the battles of Stones River, Perryville, Chickamauga, Lookout Mountain, Chattanooga, Missionary Ridge and other battles north of Dalton. Others died of disease and sickness in Dalton's Confederate hospitals. A monument was erected in 1892 to commemorate the Confederate soldiers who died in the battles of Dalton, Rocky Face, Chickamauga and Resaca.

This is the home of the Whitfield-Murray Historical Society, which houses Civil War artifacts (some from the Orphan Brigade excavated by the Dalton Civil War Roundtable), and research material on the Civil War.

The second Atlanta Campaign pavilion and relief map is located in Mill Creek Gap. Here the Confederates dammed Mill Creek to create a lake and block the gap, stopping Gen. George Thomas's Federal forces. The map features the events that occurred around Dalton.

This beautiful home, built by John Ham-ilton about 1840, served as headquarters for the celebrated Brig. Gen. John H. Lewis' Kentucky Orphan Brigade. Lewis had his tent near the Spring house.