The town of Tunnel Hill was an important railroad town on the Western and Atlantic Railroad during the Civil War, used for supplying the Confederates during the Chickamauga and Chattanooga battles and for supplying the Union during the Atlanta Campaign. Hospitals were located here, and several antebellum homes and buildings remain, as do breastworks constructed by both armies. 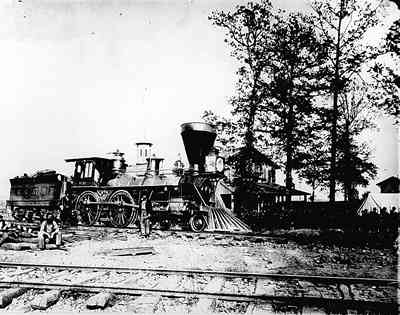 Tunnel Hill was the scene of much activity during the Civil War. Goods and supplies going from the Western Frontier via Chattanooga to the Atlantic Coast had to pass through this 1,447-foot long tunnel. An engineering marvel when it was finished in 1850, the tunnel was built by two separate parties who started on either side of Chetoogeta Mountain and dug to the center. It remained in use until 1920 when a larger tunnel was dug next to it. The oldest tunnel in the southeastern U.S. — the first south of the Mason-Dixon line — it was contested at least four times between Confederate and U.S. forces in 1864, and U.S. Gen. William T.Sherman began the Atlanta Campaign on May 7, 1864 by seizing Tunnel Hill, where Confederates had maintained a camp after the Battles of Chattanooga. " The Great Locomotive Chase" raced through the tunnel. A fertilizer company has part of the old Tunnel Hill Depot, where Confederate President Jefferson Davis stopped and gave a rousing speech early in the War. Battle of Tunnel Hill Reenactment is held first weekend after Labor Day. Tours of Clisby Austin offered, with profits going to preservation of Tunnel Hill War sites.

The Clisby Austin House was used as a Confederate hospital following the Battle of Chickamauga and Gen. John Bell Hood recovered here after having his leg amputated due to injuries suffered on the Chickamauga battlefield. U.S. Gen. William T. Sherman headquartered here from May 7-12, 1864, during the fighting around Dalton at the beginning of the Atlanta Campaign. The house is privately owned.

This three-story grist mill, established in 1855, is on the National Register of Historic Places, and is one of Georgia's best examples of the mills which played an important economic role in the riverine South. It was the camp site for 600 U.S. soldiers in February 1864 after skirmishing near Dalton. Confederate Gen. Joseph Wheeler set up camp here with 2,500 men en route to Tunnel Hill in April 1864. Grounds are open during daylight hours and the buildings are open during the Prater's Mill Country Fair held annually on Mother's Day weekend and the second weekend in October.

The Varnell House, built in 1847 by "Dry Dan Dold," was used as a Confederate and Federal hospital and was headquarters for several Federal generals. A number of skirmishes were fought around the house, including a Confederate victory when Confederate cavalry great, "Fighting" Joe Wheeler swung around the Union left flank on May 12, 1864, taking the town, inflicting casualties, and capturing 100 prisoners, including nine officers.