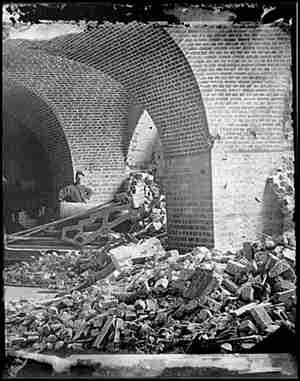 On Jan. 3, 1861 in one of the first military actions of the Civil War, Georgia troops under Alexander Lawton bloodlessly seized Fort Pulaski from two Federal caretakers. Fifteen months later, a military lesson would be learned here about rifled cannon and brick forts which would effect the way war was fought for the next century. The fort had been built as a response to lessons learned during the War of 1812, which proved America's ports were easy targets for enemy navies. Savannah's main fort was built on Cockspur Island at the mouth of the Savannah River, 15 miles downstream from Savannah. When construction began in 1829, one of the engineers was 2nd Lt. Robert E. Lee, fresh from graduation at West Point. Eighteen years, 25 million bricks, and a million dollars later, Fort Pulaski was born. With five faces 7-1/2 feet thick and 25-feet high, surrounded by a moat 48-feet wide, and armed with 39 guns, it was a formidable sight. Now two months before Lincoln's inauguration, Georgia was seizing Federal military property. Col. Charles Olmstead, a 25-year-old, was commanding the fort on Oct. 29, 1861 when Robert E. Lee, after inspecting the fort and studying the Tybee shoreline almost a mile away, confidently told him that the fort was secure from cannon fire there. "They will make it pretty hot for you with shells, but they cannot breach your walls at that distance," he said.

On Nov. 24, 1861 having found Tybee evacuated, Federal troops landed and took possession of the island. A Union topographical engineer, Lt. James H. Wilson, who would return to Georgia in 1865 as a general leading 15,000 cavalry, had discovered channels in the marsh where Federals could cut around the fort and place guns upstream, effectively cutting the fort off from its supply base in Savannah. Meanwhile, Maj. Gen. Quincy Gillmore was struggling in the swampy muck of the marsh to secretly build-in 11 batteries and place 36 guns on Tybee so that he could fire on the fort. This required incredible labor and engineering, all at night, with 250 men pulling each mortar weighing 8 and 1/2 tons into place. Part of his arsenal included the new James rifled cannon — two 84 pounders, two 64 pounders, and one 48 pounder. Finally, with the guns aimed on Pulaski, Gilmore asked for Olm-stead's surrender. Olmstead replied, "I am here to defend the fort, not surrender it." Minutes later on April 10, 1862, Gilmore opened fire. The bombardment lasted 31 hours, hurling 5,275 shots and shells at the fort. The Union's rifled cannon started to break through the walls, threatening the powder magazine. At 2 p.m., April 11, Olmstead raised a white flag and surrendered his garrison of 385 men. After the fort was surrendered, it became a Federal stronghold, preventing Confederate use of Savannah as a seaport.

The destruction of Fort Pulaski marked the end of masonry fortifications, a radical change in the history of warfare. The fort today is a national park and one of the best Civil War sites to tour in the state. Living history events include a Siege and Reduction Weekend, sponsored annually on the weekend closest to the battle anniversary (April 10-11). Other living history programs take place on St. Patrick's Day, July 4, Labor Day, Veterans Day and Christmas. Call Fort Pulaski for details. You might want to tour the Tybee Lighthouse, located on Tybee Island, built in 1773. Confederates burned the interior wood stairs to prevent approaching Federals from using it, but Union troops rebuilt the stairs and watched the bombardment 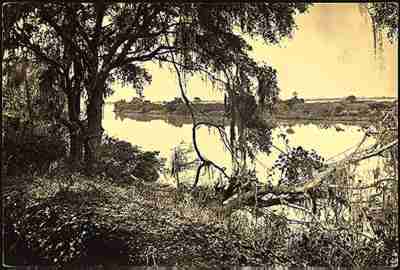 of Fort Pulaski from the top. Fort Wimberly, located at Wormsloe Plantation Historic Site on Skidaway Island, is a series of still visible breastworks and a large earthen battery used to guard a water approach to Savannah.

Savannah has more Confederate general graves than any other city in the state, with six at Bonaventure Cemetery and eight at Laurel Grove Cemetery. Laurel Grove, established in 1852, also has a large Confederate soldiers section with 1,500 soldiers (101 of whom died at Gettysburg), watched over by "Silence," the former Chatham Memorial statue. Laurel Grove was split into North and South sections by the Interstate 16, and the Civil War interments are in the north section. Located in this cemetery are generals Francis Bartow, Jeremy F. Gilmer, Paul J. Harrison, Sr., Gilbert M. Sorrel, LaFayette McLaws, Peter McGlashan, Henry C. Wayne, and Edward C. Willis, along with Col. Charles Olmstead, who surrendered Fort Pulaski. 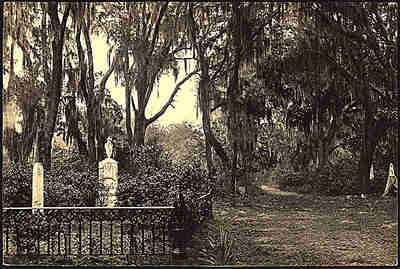 Gilmer was a military engineer who married a sister of C.S. Gen. E.P. Alexander; Harrison, whose son was also a general, fought with the Georgia Militia and was captured; McLaws fought in the Eastern Theater, at Chickamauga, and he commanded the district of Georgia during Sherman's "March to the Sea"; McGlashan was Scottish and fought in the Eastern Theater and was captured at Sayler's Creek; Sorrel served with Longstreet and became a famous staff officer in the Eastern Theater; Wayne served with the Georgia Militia opposing Sherman; and Willis commanded in the Eastern Theater and was killed at Bethesda Church. Francis Bartow, a Savannah native, had since 1856 been a captain of a volunteer militia unit in Savannah known as the Oglethorpe Light Infantry. When the act authorizing the organization of Confederate troops was passed, he notified his troops and they were the first to sign up for the War. At the Confederate Congress, Bartow was chairman of the Committee of Military Affairs, and he was responsible for the gray color of Confederate uniforms. At the Battle of First Manassas, on July 21, 1861, he was leading his brigade when he was shot from his horse. Col. Lucius J. Gartrell, later to be a general, caught him and held him while he was dying. Bartow uttered his historic last words, "They have killed me, boys, but never give up the fight!" Cass County was renamed Bartow in his honor.

At Bonaventure, what some consider the most beautiful cemetery in the state, are buried Confederate generals Robert J. Anderson, Henry R. Jackson, Alexander R. Lawton, Hugh W. Mercer, Claudius C. Wilson, and Commodore Josiah Tattnall. Anderson commanded cavalry in the Atlanta Campaign under Wheeler; Jackson served in Western Virginia and Georgia; Lawton, president of the Augusta and Savannah Railroad, was educated at West Point and Harvard, and married the sister of Gen. E.P. Alexander. Until he was severely wounded at Sharpsburg, when his brigade lost 565 of 1,150 men, Lawton was the leader of the famous Lawton-Gordon-Evans brigade — one of the hardest fighting in the War — under Stonewall Jackson. When Lawton recovered, he became quartermaster general of the Confederate Army until the end of the War. After the War, he became president of the American Bar Association and was U.S. Minister to Austria. Mercer commanded in the Atlanta Campaign; Wilson commanded at Chickamauga and Chattanooga and died of disease in Ringgold 13 days after Missionary Ridge; Tattnall's naval record includes action in the War of 1812, the burning of the ironclad Merrimack, and the naval defense of Savannah.