I used to work in the oil business and now I work at Lenz.

I had a friend that worked with me at the BP gas station, and he had a gun pulled on him by a robber that wanted cash. The robber escaped with the cash and spared my friend his life. My friend was badly shaken as I came into work to relieve him of his shift at 6 in the morning.

I told my brother the story about the robbery and he looked a bit concerned—no more source of cheap beer and gas.

Soon thereafter, I received the opportunity to get off of the mean streets of Chamblee/Dunwoody and join Lenz.

I started working full time for Richard at Lenz Design & Communications in August, 1993 and it was the best thing besides Kerry that has ever happened to me. Richard gave me the leeway to make mistakes and learn from them. My current title is Vice President. 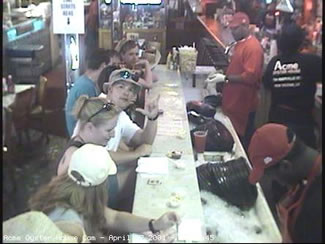 The best and only raw oysters that I will eat (at bars or restaurants) are found at ACME Oyster House in New Orleans or the Indian Pass Raw Bar near Cape San Blas, Florida. Also, the Union Oyster House in Boston is excellent.

Kerry likes the baked oysters that the Indian Pass Raw Bar offers... what's not to like about butter, garlic, and parmesan cheese?

The Acme Oyster House is an excellent oyster bar and restaurant. You can usually see me at the bar during the Jazzfest at 11:05 a.m. every morning. They have an Oystercam set up at the end of the bar that takes a picture every 20 seconds. The above picture is from Jazzfest 2001, and soon after it was taken, there were a pile of shells and a few empty beers sitting in front of me.

I have set up an informative page for how to eat an oyster, just in case you need some help. 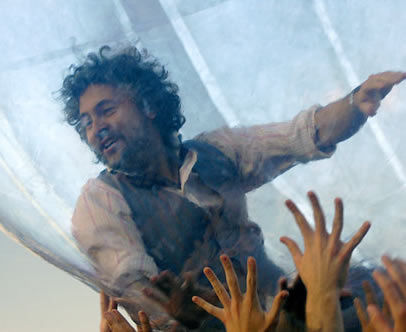 I keep a running list of band names that my friends and I have thought of. Let me know if you have any good ones.

Since I like to cook, I'll be adding my favorite recipes to this page.

My new repository for collaborative recipes.

Go back to last page.