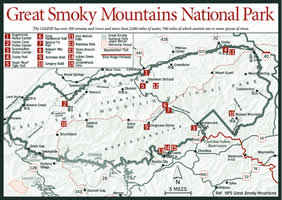 The origin of the grassy balds within the Smokies is uncertain. Early white settlers found these treeless patches on top of mountains well suited to provide summer pasture for their cattle and sheep. Both Andrews Bald and Gregory Bald are maintained by the Park Service against encroaching vegetation (see Balds, page 12).

[Fig. 45(9)] As you descend from the parking lot at Clingmans Dome on the Forney Ridge Trail, you pass through a forest of red spruce and Fraser fir trees under attack by the deadly balsam woolly adelgid, a non-native, sap-sucking insect. Andrews Bald is a large grassy bald named for Andrews Thompson, a settler who grazed his cattle on the bald in the 1850s. It is the easiest bald to reach, and it is known for its outstanding views of June's display of orange flame azalea and pink Catawba rhododendron. The trail passes through thickets of blackberries (Rubus allegheny) and raspberries (Rubus idaeus) that ripen in late July or early August.