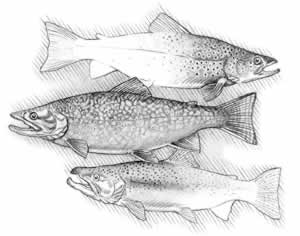 This area was once a Cherokee hunting ground and includes a portion of the Nickajack Trail, an important Native American pathway that extended from Hickory, North Carolina, to Chattanooga, Tennessee. Shortly after 1750, the European pioneers settled here and began logging the dense forests. Mortimer, the largest community, was the site of the Riddle Lumber Company sawmill and a small textile mill, which provided jobs for the community's 800 residents. Substantial logging took place between Wilson and Steel creeks, and the trees were hauled to the mill via a narrow-gauge railroad.

In 1916, a fire burned from Grandfather Mountain to Wilson Creek, and was immediately followed by a flood which destroyed the logging railroad. In 1925, a second fire swept through, this time from Upper Creek to the south. The railroad, which had been rebuilt, was lost once again. When a second flood hit the area, it washed away both the sawmill and the textile mill. Those economies never recovered, and few residents remain in the community today.

The Wilson Creek area now enjoys a new tourism economy based on its rich backcountry. More than 75 miles of hiking trails offer treks through a variety of habitats: creekside, ridgetop, rocky overlooks, woodland, and waterfalls. The trails course through yellow birch and sycamore trees growing in lowland sites in the Wilson Creek area and through oak, maple, and hickory stands in the highland forests. Mountain laurel and rhododendron grow in dense thickets throughout the region. One off-road vehicle trail has been designated along Wilson Ridge, far removed from the hiking trails.

Late-spring and summer birds include the wood thrush, catbird (Dumetella carolinensis), chestnut-sided warbler (Dendroica pensylvanica), ovenbird, and near Wilson Creek the least flycatcher (Empidonax minimus) and warbling vireo (Vireo gilvus). Wilson Creek is also known as a good site for watching the autumn hawk migrations. The area has been stocked with bear and wild turkey (Meleagris gallopavo) and supports a large white-tailed deer population, plus many squirrels and ruffed grouse (Bonasa umbellus). More than 100 miles of trout streams are designated as general, native, or trophy trout waters and have made Wilson Creek one of the best fishing destinations in the region.

As the river runs through the Wilson Creek Gorge, it tumbles and turns over rocks and boulders to form cascades, small falls, and pools ideal for kayaking and canoeing by experienced paddlers. There are numerous places, too, for the more leisurely water enthusiast. Popular mountain biking-trails include the 15-mile Wilson Ridge Trail and the 2.4-mile Woodruff Branch Trail; both are rated moderate. The mystery of the Brown Mountain Lights adds another enjoyable element to a trip into Wilson Creek (see Brown Mountain Lights, page 65).

[Fig. 8(17)] Some say they are quick, bright flashes. Others insist they're a slow, hazy glow. According to Indian legend, they have haunted Brown Mountain since the 1200s. And local lore maintains that Thomas Alva Edison, inventor of the electric light bulb, was among those who admitted that they defy scientific explanation.

Nevertheless, plenty of explanations, scientific and otherwise, have been proposed for the strange Brown Mountain Lights that flicker and gleam from this spot in the Pisgah National Forest. Reflection from cars or a passing locomotive is a common theory. But those who dispute this theory say the lights were reported long before either modern invention existed. Since 1913, several studies of the lights have been commissioned. Researchers speculate that the luminous appearances could be due to St. Elmo's Fire (electrical discharge during thunderstorms), Andes Light (named for the radiant discharges seen over the crests of Chilean mountains), fox-fire (phosphorescent light emanating from fungus and decaying matter), or simply moonlight shining on fog. Thousands of people have reported seeing the lights, with sightings occurring in all seasons. While some believe they are a natural phenomenon, others subscribe to one of the folktales or myths centering on murder, loyalty, Indian battles, and lost love. But whether the cause is rooted in science or the supernatural, many agree that the lights are a part of the magic of the mountains.