[Fig. 13] In nature's ever-changing flow, Linville Falls has been steadily shifting upstream. Approximately 450 million years ago during ancient periods of continental collision, the earth's crust folded and faulted, thrusting older rock northwestward over younger rock. At the falls, a layer of billion-year-old Cranberry Gneiss (named for the North Carolina town Cranberry, not the color) graphically illustrates this ancient occurrence.

Over millions of years, the river plunged over the hard rock layer on top and scoured the softer beds below. As the undermined lip eroded, the falls moved upstream, creating the gorge. Geologists believe that millions of years ago the falls were as much as 12 miles farther downstream. Currently, hard quartzite rock extends down to the floor of the gorge, making further migration of the falls much slower. 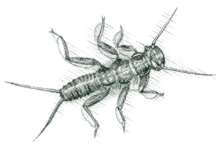 The Cherokee first called the river Eeseeoh, appropriately meaning "a river of many cliffs." The name changed to honor William Linville, who, with his son, John, explored and hunted in the gorge in the eighteenth century. Indians surprised and attacked them in 1766 as they slept by the river below the falls. William died, but typical of much of the lore of the region, accounts vary as to whether John survived. In 1952, John D. Rockefeller Jr. donated the land to the National Park Service with the stipulation that the tract be protected in its natural state.

[Fig. 13(1)] Four trails lead from the visitor center to different points along the river. Erwins View Trail (some books refer to it as the Linville Falls Trail, but signage reads Erwins View Trail) is a moderate hike that features four overlooks, each providing a different perspective on the geology and geography of the falls area. A number of heath gardens grow in this area along exposed, rocky sites where sandy soil supports sand myrtle, blueberry, the unusual turkey beard, and rare sweetleaf (Symplocos tinctoria). This trail is also remarkable for the virgin forest where sourwood (Oxydendrum arboreum) and Carolina hemlock (Tsuga caroliniana) thrive alongside oaks and white pine. The range of the Carolina hemlock is only 100 miles long by 20 miles wide in the southern Appalachians, with the largest stands found in the Linville Gorge area. Ledges and cracks in the steep rock faces become veritable hanging gardens during the blooming seasons of tenacious shrubs and trees such as Fraser magnolia, mountain laurel, swamp azalea, and three varieties of rhododendron.

From the visitor center, the Linville Gorge Trail descends into the gorge after .7 mile, climbing down steep trails and in one area a set of 27 wooden steps to negotiate the steep terrain. Massive rocks form the sheer gorge wall as the trail continues down toward the river, ending at a place adjacent to the Lower Falls. Along its route, the trail passes through tunnels of mountain laurel and past magnolia and rhododendron. This is an excellent hike that provides ample rewards to make up for the sometimes strenuous climb back up. 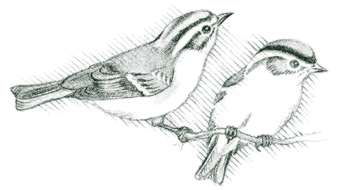 For a breathtaking view of the river before it tumbles over the Lower Falls into a deep pool below, take the Plunge Basin Trail (1 mile round-trip). At the stone overlook, the view of the Chimneys, which are chimneylike rock outcroppings located to the left of the waterfall, is also outstanding.

Duggers Creek Trail is an easy .5-mile stroll across a rushing creek with waterfalls and a ravine as beautiful as Linville Falls, albeit much smaller. This is a different type of interpretive trail. Rather than identifying trees and wildflowers, the signs offer thought-provoking quotes from leading naturalists such as John Muir and Marjorie Rawlings. None of the trails at Linville Falls connect with trails in the Linville Gorge Wilderness Area. Maps are available at the headquarters building from May through October. Along the trails, the abundant white pines and hemlocks shelter red-breasted nuthatch, blackburnian warbler, and golden-crowned kinglet. In addition to species common to this region, least flycatchers (Empidonax minimus), red crossbills (Loxia curvirostra), and cerulean warblers (Dendroica cerulea) have been spotted in and around the trails. Green-backed heron, belted kingfisher, Acadian flycatcher, and Louisiana waterthrush (Seiurus motacilla) frequent the river where it flows more gently in an area visible behind the visitor center. While the roar of the falls is part of its appeal, it does drown out more delicate bird calls.