The Warm Springs of the Southwest Georgia Piedmont

There are at least seven different groups of warm springs known in Georgia, but the most widely known is a group of springs that emerge just north of Pine Mountain near the city of Warm Springs in the southwestern Georgia Piedmont. The Indians knew of the springs and their mystical healing powers in the early years, likely well before the English began colonizing Georgia. The warm, mineral-rich waters were used by the Native Americans to speed the healing of their wounded and sick.

As European settlers moved into Georgia, word spread about the warm spring waters and their healing powers. Soon, the town of Bullochville sprang forth near the springs. In 1832, David Rose, a local entrepreneur, built the first resort on the site of the warm springs. His resort prospered until 1865 when it was destroyed by fire, but it was soon rebuilt. Although the springs continued to be utilized, the area and the resort fell into decline around the turn of the century. 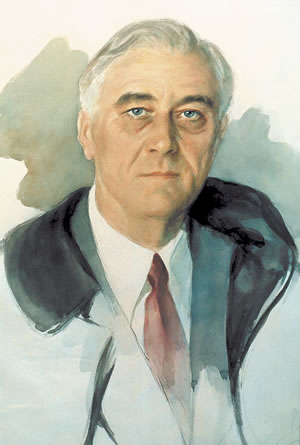 The warm springs gained national significance in 1924 when they were visited by President Franklin Delano Roosevelt who found the waters beneficial after his attack of poliomyelitis. Shortly thereafter the city of Warm Springs was incorporated, and in 1927, the Georgia Warm Springs Foundation was founded by President Roosevelt to provide therapeutic treatment for other victims of the disease.

What is the source of the warm, healing waters? Why are these springs found at this locality? Although many scientists have contributed to the understanding of the geology and hydrology of this region, studies conducted by two U.S. Geological Survey scientists, D.F. Hewett and G.W. Crickmay, during the period 1933 through 1935 provided the greatest insight.

The Warm Springs area is a gently rolling upland on the Greenville Plateau of the Southern Piedmont physiographic province. From this plateau rise two prominent landscape features: Pine Mountain and Oak Mountain. The summit of Pine Mountain is an area known as Dowdell Knob that attains an altitude of 1,395 feet, which is more than 600 feet higher than the general altitude of the city of Warm Springs. The city of Warm Springs occurs on the watershed divide separating the Chattahoochee and Flint river drainages. Rainfall on the western side of Warm Springs drains to the Chattahoochee and rain that falls on the eastern side drains to the Flint.

This area of Georgia has experienced numerous and significant tectonic, or earth-shaping, events during its geologic past. The rocks that make up the earth's crust are in a constant state of movement. Usually the movement is so slow that it is not perceptible; however, when an earthquake occurs, the movement can be rapid and violent. When earthquakes occur the rocks are folded, broken, metamorphosed, and often times faulted. Faulting occurs when the pressures exerted on the rocks results in the movement of layers. The movement can be lateral like the faulting that occurs along the San Andreas Fault in California, or the movement can be vertical. Vertical faulting that occurred during the geologic event referred to as the Appalachian Orogeny resulted in the formation of the Appalachian Mountains that extend from Alabama up the eastern coast of the U.S. This same orogenic event is likely responsible for the development of Pine and Oak mountains.

Several major fault systems traverse the southwest Georgia Piedmont. Goat Rock Fault extends southwest-to-northeast just south of Oak Mountain, and the Towaliga Fault extends southwest-to-northeast just north of Pine Mountain. A secondary fault, referred to as the Warm Springs Fault extends east-to-west through the city of Warm Springs and bisects the Towaliga Fault. As a result of these faults, Precambrian-age rocks, which are more than 550 million years old, have been uplifted to a vertical position that is more than 600 feet higher in altitude than younger crystalline rocks. These rocks have been identified as belonging to the Hollis Quartzite formation.

Not only does faulting deform, metamorphose (change their structure), and offset rock layers, but the associated fracturing of the crystalline rocks creates pathways for water to move. Studies conducted by the two U.S. Geological Survey scientists in the early 1930s showed that the water flowing from the springs at Warm Springs originates as rain falling on the crests of Pine Mountain. The rainwater infiltrates the soil and percolates through the cracks in the Hollis Quartzite to a depth of about 3,000 feet. Heat generated by the earth's core warms the rocks approximately 1 degree Fahrenheit for each 100-foot increase in depth. Thus, the water seeping through the fractures of the Towaliga Fault is warmed approximately 30 degrees by the time it reaches a depth of 3,000 feet. Pressure created by the infiltrating rainwater pushes the warmed groundwater up along the fracture zones associated with the Warm Springs Fault. Although the water cools slightly as it ascends, it discharges at a reported rate of as much as 914 gallons per minute at Warm Springs at a fairly constant temperature of 88 degrees Fahrenheit. Because the groundwater is warmed at depth, it is enriched in calcium, magnesium, and silica. There were no constituents detected in the groundwater that would provide medicinal benefits; therefore, it is assumed that the therapeutic benefits derived from bathing were primarily from exercise and the temperature of the water.

Although the pools at Warm Springs are still functional, the Georgia State Parks Authority does not allow them to fill. A touch pool is provided where visitors are able to feel the spring waters while envisioning the place's history. President Roosevelt died at his home in Warm Springs on April 12, 1945, while posing for the "Unfinished Portrait."