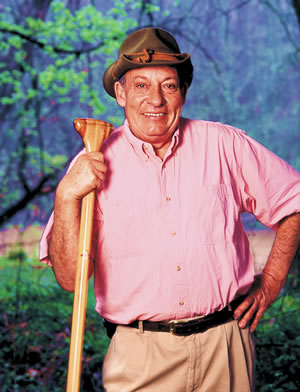 It was a cold March morning when Richard Greene slid his green Mad River solo canoe into the Flint River at Woolsey Bridge, about 25 miles south of downtown Atlanta. Although the Flint offers majestic views elsewhere, here the river looks puny and undistinguished, resembling a muddy creek as it winds through a rural area where subdivisions are just beginning to render pastures and corn fields both obsolete and quaint. To the casual motorist, nothing would have seemed remarkable about the sight of Greene, a 58-year-old Marietta veterinarian, dipping a paddle into the dark waters and disappearing around the bend.

Greene almost didn't make it. In December of 1995, he underwent surgery for highly malignant prostate cancer. It was the same disease that ended his father's life at the age of 62. Before and after the surgery, Greene tried to put his life in order. He thought about his children, two sons and a daughter, and his friends at the Georgia Canoeing Association. He thought about all the things he never did. About the childhood promise he had made to himself.

"Growing up, the Flint was always it," he said, nearly two years after launching his canoe on that spring day. It's been five years since the doctors pronounced him free of cancer.

"I always wanted to know where it went up. Where it went below. But life gets bunched up. I never got the time."

After his surgery, Greene made the time. He figured this was his second chance in life, an opportunity that most people don't get.

So on that cold March day, Greene put his canoe into the first stretch on the Flint River where it seemed navigable. The river actually starts above the Atlanta airport, then flows below the runways in cavernous drainpipes. When the river exits on the south side of I-285, it resembles a badly eroded drainage ditch-nothing you'd want to dip your toe into. By the time it reaches Woolsey Bridge, it appears, through the miracle of wetlands, healed.

Fifteen minutes after his launch Greene glided to a stop in front of a dead tree that lay across the river. Experienced canoeists have a name for them: deadfalls.

To get around it, he paddled to the riverbank. Lifted his stocky body out of the canoe (he's 5'9" and weighs in at a solid 180 pounds). Scooted himself over the tree trunk (the reason he had picked this day in late winter was to avoid snakes in situations just like this). Dragged the canoe over the deadfall with a rope tied to the bow. Lowered himself back into the canoe.

That day he encountered a total of 33 deadfalls.

It was so frustrating, he thought about quitting the childhood dream business. But along the way, he saw things. Swamp tupelo trees. Pristine sandbars. Otter slides. Beaver dams. And just as important was what he didn't see-Atlanta's noisy, fuming sprawl.

Six hours and 10 miles later, Greene reached his take-out point at the Highway 92 bridge where a friend from the canoe association met him. He was hooked. The river was "it" again. As Bobbie McGinty, the receptionist at his Marietta animal clinic, said recently with a sigh, "The Flint River was the only topic of conversation for a long time."

Over the next four months, Greene returned 14 more times to put in where he had last taken out. He documented his childhood dream in over 1,000 photographs that fill five photo albums and three large notebooks brimming with Flint-related history and trivia.

It's the stuff of childhood dreams. The bridges, creeks, mill ruins, turtles, and bizarre driftwood, some of it caught in high, unlikely places-what he refers to as "souvenirs from the 1994 flood."

Along the way, Greene would see one stretch of river and tell himself that it was the most beautiful of all. Then he would come to another stretch and say the same thing. Then another.

Paddling downriver at 2.5 mph, Greene saw a frisky Piedmont river that flows over rocky shoals slowly transform itself into a serpentine, Coastal Plain river that flows through sand and limestone. In the area known as "The Cove," he saw mountain laurel growing beside palmetto, a fascinating mix of plants from different physiographic regions.

Above the treacherous Yellow Jacket Shoals, he met with Jim McDaniel, who has presided over the river since 1978 from his Flint River Outdoor Center. During that time, McDaniel remembers only two other dreamers who have seen every inch of river mile on the Flint-two Columbus teenagers who paddled hard for several weeks on a 1981 expedition.

Along the stretch of river between Marshallville and Montezuma, Greene saw alligators and Spanish moss together for the first time. One of the wonders of the entire trip is also located there-a high bluff embedded with fossilized oyster shells (just south of the boat ramp at the Montezuma Bluffs natural area).

Near Albany, Greene passed the stretch of river that lent the Flint its name. Thronateeska, meaning "flint picking up place," was one of many Creek Indian villages along the banks of the waterway and its tributaries. Below Albany, instead of sandbars, he saw rocky ledges and caves, limestone outcroppings from where the river cuts across the aquifer that underlies this entire region.

In June of 1999, the soft-spoken veterinarian reached the quiet, impounded waters of Lake Seminole, its 37,500 watery acres formed by the confluence of the Flint and Chattahoochee. But he wasn't quite finished. A year later, he slipped his canoe into the water below the Jim Woodruff dam to finish the last leg of his journey on the Apalachicola River. After five days and nights of paddling and camping out on sandbars, he floated into the salty waters of Apalachicola Bay.

Fifty years later, Richard Greene knew where the Flint River came from, and where it went.