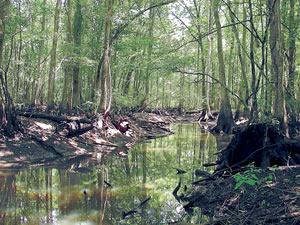 One of the most significant conservation measures ever taken by the state of Georgia was the purchase of a major part of the Chickasawhatchee Swamp.

Few people outside a handful of locals, timber company employees, and hunters have ever heard of or visited the Chickasawhatchee Swamp, yet it is the largest wetland in the Flint River Basin and the second largest deep-water swamp in Georgia. Undoubtedly, more people will soon become aware of this unique ecological region and the many benefits that its acquisition and conservation will bring.

The Chickasawhatchee Swamp is a convergence area of drainages in its watershed of approximately 335 square miles. Creeks fed by both surface water and groundwater sources meander around gently rolling hills of upland forest consisting primarily of pine stands. Areas between these uplands and bottomland habitat, or ecotones, are particularly important to the ecosystem because of the exceptionally high diversity of plant and animal life there. A number of rare plant species including the corkwood (Leitneria floridana), needle palm (Rhapidophyllum hystrix), and green fly orchid (Epidendrum conopseum) are found in the swamp.

Water from the creeks spreads out and regularly floods vast areas of bottomland hardwood forests. These low-lying areas have a tremendous water-holding capacity and play a major role in flood control for the region. Covered with healthy cypress (Taxodium sp.), tupelo (Nyssa aquatica), and black gum (Nyssa sylvatica) stands, the large bottomland hardwood forests are typically inundated with water. Here the swamp functions much like a giant tea bag that releases large quantities of nutritious matter from decaying vegetation and stains the water a deep, golden-brown color.

From this interaction of forest, creeks, and wetlands emerges a complex food web, which supports a variety of wildlife. A diverse assemblage of reptiles including many species of turtles and snakes, as well as a large population of alligators thrives in the swamp. The wetland areas are used as rookeries by native wood storks and also serve as nesting areas for neotropical migrants such as the wood thrush (Hylocichla mustelina) and prothonotory warbler (Protonotaria citrea), which depend on the unique web of life that begins in the swamp.

The geologic formation directly beneath the swamp is the Ocala Limestone, the major formation of the Upper Floridan aquifer. The lowland areas are massive depressions in the limestone that form through gradual subsidence that occurs as underlying limestone bedrock dissolves and collapses. The relatively direct connection to the aquifer immediately beneath the swamp complex makes the Chickasawhatchee hydrologically distinct from other deepwater swamps. Because of the connection, rapid exchanges of water between the swamp and the aquifer take place both as aquifer recharge, and as natural discharge to the streams through numerous springs and seeps. During much of the year, the Spring Creek watershed that contributes to the Chickasawhatchee Swamp, receives most of its water as discharge from the Upper Floridan aquifer in an area northwest of the swamp. The creek maintains flow even under extreme drought conditions. During high flow periods, the swamp is a major recharge area of the Upper Floridan aquifer.

When it purchased the Chickasawhatchee Swamp, the State of Georgia invested in the positive future of its surface and groundwater resources.