The Albany Levee: Trying to Tame the Flint 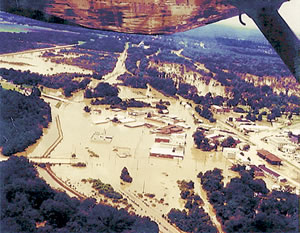 As the city of Albany looks to the Flint River to spark tourism and economic development, some are also looking to tame the river and prevent future flooding in certain parts of town with a proposed levee. The two efforts seem to contradict each other. While the Flint RiverCenter celebrates the unique and complex hydrology and geology of the natural floodplain, the levee project calls for forever changing the flow of the river (not just through Albany) and plugging springs to alter the flow of underground water resources, too.

Residents of Albany are rightfully skittish when it comes to flooding. In July 1994, Tropical Storm Alberto parked over southwest Georgia and dropped enough rain to cause the worst flood in Albany's recorded history, with the Flint River cresting at 193.13 feet. Prior to that time, the highest the Flint had crested at Albany was 186.5 feet in 1925. Just as the city was beginning to recover, it suffered another devastating flood in March 1998. City officials approached the U.S. Army Corps of Engineers looking for a man-made solution. The result is a proposed 4.6-mile levee on the west bank of the Flint River. 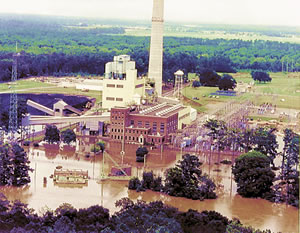 Supporters say a levee is needed to protect businesses and homes of South Albany rebuilt in the floodplain after the '94 and '98 floods. Opponents maintain there is no guarantee the levee would protect the area (even the Corps admits levees have not worked in the past on rivers like the Mississippi) especially considering the underground conduits that are naturally occurring in the Upper Floridan aquifer. It would also disrupt the river's ecology and worsen flooding in areas across from, above and below the levee, including downtown Albany, Radium Springs, and Mitchell and Baker counties. It is estimated the proposed levee would cost $28.5 million, with a maximum of $7 million coming from the Corps on April 23, 2002, the Albany City Commission voted not to seek other federal funding support, so the rest of the money would have to come from local and state sources. The city's cost would be 5 percent, or approximately $1.2 million. Environmentalists estimate the costs would be even greater to the river and the streamside habitat. 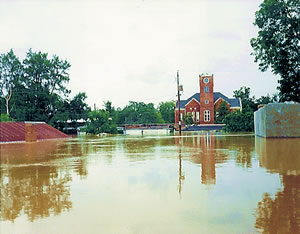 The levee proposal calls for clear-cutting over 2,000 acres of floodplain (riparian) forest on the west side of the river, including a section of old landfill which potentially could leach harmful chemicals into the river. According to the Corps, removing that vegetation will increase the velocity of the river water and prevent the levee from causing water to back up and flood other areas. Environmentalists and residents across the river don't buy that argument and are also concerned about erosion and sedimentation that will result from the clear-cutting.

Probably of greatest concern to environmentalists is the Corps plan to plug underground caverns and limesinks to prevent water from passing under the levee. Charles Owens, Project Manager for the U.S. Army Corps of Engineers, says if the levee is built, his agency will locate limesinks that threaten the levee, dig a trench down to them, and plug them with a clay material. "Nothing we do will ever impede the natural
underground water flow," Owens says. "We'll only plug limesinks where they cross the levee." 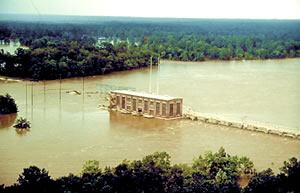 The Georgia DNR has expressed its opposition to the levee and its concerns that plugging limesinks and impeding the underground flow of water will inevitably have a negative impact on wildlife, particularly striped bass. In its preliminary analysis dated May 14, 2001, DNR said sealing fissures would prevent groundwater from flowing into the river during low flow periods and thus destroy vital cool water refuges for the fish.

According to Sandy Tucker, Field Supervisor for the U.S. Fish and Wildlife Service North Georgia Field Office, her agency shares the DNR's concerns about the levee's potential effects on fisheries and also has concerns about impacts on federally listed freshwater mussels and neotropical migratory birds. She says removing most vegetation on 2,000 acres will eliminate a forested riparian corridor that serves as an important breeding area for the birds.

Despite concerns expressed by these and other groups, Albany city commissioners and the Corps continue to move forward with plans for the levee. Owens says the Corps received a letter of intent from the city stating it did want to move forward with the project and it would be looking for funding to build the levee. The Corps continues to work on its study of the project. In August 2001 it completed an Environmental Assessment for the proposed levee and issued a Finding Of No Significant Impact (FONSI) for the project, much to the surprise of USFWS and DNR. Tucker says USFWS mistakenly thought the Corps was still trying to determine if there would be negative impacts from the levee. When it issued the FONSI, the Corps showed it had accepted there would be negative impacts and had decided to move forward anyway. "The FONSI sends a message," Tucker says. "It gives momentum to the project, shows the Corps thinks it's a good project."

USFWS and DNR believe the Corps has not taken their concerns seriously enough, and as a result they have formally asked the Corps to withdraw the initial FONSI and address their issues, as well as those raised by local citizens and others.

In the meantime, at the urging of the Radium Springs Neighborhood Association, the Dougherty County Commission continues to oppose the levee. According to Richard Crowdis, County Administrator, the county never endorsed the city's application for the project, and since then county commissioners have formally voiced their concerns twice to state and federal officials. Their opposition is particularly significant because the proposed levee goes outside the jurisdiction of the city into unincorporated Dougherty County. So, can the city and the Corps build this project without the county's approval? Richard Crowdis says the county asked Charles Owens that question and Owens didn't have an answer. "He just said he thought the county was in concurrence with the city," Crowdis says.

But the Corps doesn't deserve all the credit for the levee controversy brewing in Albany. Many, including the DNR, are asking why federal money from the
Department of Housing and Urban Development (HUD) was used to rebuild in the floodplain. In its analysis, DNR says, "The proposed levee appears to be a case of spending additional public funds to protect already questionable expenditures, while ignoring potential opportunities to implement more effective and environmentally sound flood avoidance strategies."

Others say the levee issue boils down to racial politics. Most of the people who live and work in South Albany are African-American, as are the city commissioners who represent them and are in favor of the levee. Some believe white city commissioners are afraid to oppose and kill the levee project for fear of appearing racist. They hope the project will get killed at a higher level.

City and county officials have a choice to make between two different approaches to living with the Flint. Supporters of the levee project have invested in the floodplain and believe it is worth trying to save human development, no matter what the ecological cost. In addition to fears about the ecological impacts of building the levee, opponents are afraid it won't work. They say the structure will only give residents and business owners a false sense of security about living and working in a floodplain. The problem is not the river, they say, it is the way man has developed around the river. The decision the people of Albany make promises to have lasting effects on the Flint River and the plants, animals, and people who depend on it.