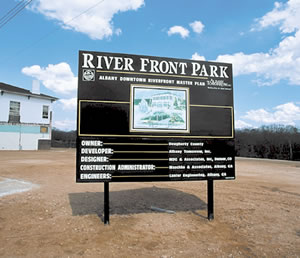 After the people of Albany were hit by Georgia's worst recorded natural disaster-the flood of 1994-they were faced with starting over. Ironically, city leaders turned to the source of their suffering, the Flint River, and decided to build their future on it. Concerned citizens, historians, elected and appointed officials, scientists, educators, and business leaders agreed to make the river the center of their $210 million downtown redevelopment initiative.

The Albany Downtown Riverfront Master Plan includes 30 to 35 projects, which involve new construction and restoration, as well as expansion and rehabilitation of existing structures. It encompasses a mix of commercial, institutional, recreational, and residential projects. Two key pieces of the plan are the Flint RiverCenter and the multi-use trails of the Flint River Educational Park.

City leaders are counting on the Flint River to help them revitalize Albany's economy by creating jobs, increasing tourism, attracting new industries, enhancing education, and improving quality of life for residents throughout the region. Thomas C. Chatmon Jr. is president and CEO of Albany Tomorrow, Inc., a nonprofit organization charged with development of the RiverCenter and revitalization of downtown. He says, "Albany was founded on the Flint River because the river could drive commerce. Today, Albany is going back to its roots-the river-to drive commerce in a different way." 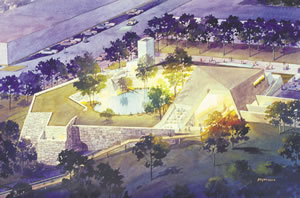 The centerpiece of the Albany Downtown Riverfront Master Plan is the $25.4 million Flint RiverCenter, a tourist attraction and a center for education and entertainment. Its mission will be to interpret the geologic, hydrologic, ecologic, and climatic conditions of the Flint River Basin. The building will surround a constructed bluehole that demonstrates water discharge from the Floridan aquifer. Visitors ranging from school children to tourists will learn about the waters of southwest Georgia through a series of exhibits found in natural history museums, aquariums, botanical gardens, and children's and science museums.

Lindsay Boring is the director of the Joseph W. Jones Ecological Research Center and serves as the chairman of the Flint RiverCenter Advisory Committee. He says, "The Flint RiverCenter is a wonderful opportunity to use water resources education as an economic
redevelopment tool for the city of Albany. The center and its proposed educational program should be a great resource for school teachers and school programs in southwest Georgia and even adjacent states."

The Flint RiverCenter will be fully funded by the state of Georgia. Chatmon says Albany Tomorrow hopes construction will be complete by spring 2004.

In the past, the only time most people in Albany took note of the Flint River was when it overflowed its banks. City planners are hoping to change that with another piece of the downtown revitalization plan-the Flint River Educational Park. The park will be a 7-mile greenway extending from Chehaw Park on the north, through downtown Albany to historic Radium Springs on the south. Along its length, the greenway will have four pocket parks or trailheads that explain environmental features or archaeological sites. The park and the Flint RiverCenter are designed to work together to showcase the Flint as a diverse ecosystem that has supported human civilization for over 10,000 years.

Unlike the Flint RiverCenter, the Flint River Educational Park is not fully funded, but Chatmon says he is confident it will be completed with a combination of public and private monies. So far, Albany Tomorrow has secured funding for phase 1 of the trail system and plans to open it in spring 2003 along with Riverfront Park, a two and one-half block area that is receiving a $6 million face-lift. The Riverfront Park connects the civic center and the planned Flint RiverCenter and includes a series of festival gardens and a walkway along the river.

Chatmon says Albany is embracing the Flint River because it is what makes the city unique. "It's what we have that no one else has. It will make Albany a destination," he says.

By making it a destination, the river will, in turn, create jobs in Albany's retail, service, and entertainment sectors. In the nineteenth century, the Flint River made Albany a thriving commercial center by bringing steamboats full of manufactured goods, agricultural foodstuffs, cotton, and passengers to be unloaded on its docks. Today, Albany is reinventing what the Flint River can do for its economic base. City leaders hope that by embracing the river and developing around it in a smart and environmentally sensitive way, their community can experience rebirth and come back stronger than ever before.