No visit to Georgia's Civil War sites is complete without a trip to Andersonville, the site of Confederate prisoner-of-war Camp Sumter. This national park tells the tragic story of Civil War prisons in general, and what happened at Camp Sumter, the most deadly Civil War prison. On Oct. 27, 1863, U.S. Secretary of War Edwin Stanton, at Gen. U.S. Grant's urging, halted the customary exchange of prisoners. Grant stopped exchanges because they helped the South, which was short on manpower. The numerically superior North could afford attrition. Neither side was prepared to house, feed and care for the growing population of prisoners, and this led to the building of Camp Sumter in early 1864 by the Confederacy to more securely house the growing number of Federal prisoners in and around Richmond, Virginia, which was close to the front lines. Camp Sumter confined more than 45,000 Union prisoners, of which more than 13,000 died from disease, poor sanitation, malnutrition, overcrowding, or exposure to the elements over the 14 months it was in operation. In the Federal prisons, the conditions were not much better, and by the end of the war, approximately 30,000 Union prisoners had died in Confederate camps and 25,000 Confederates had died in Union prisons.

Camp Sumter was a stockade fort, built roughly in the shape of a parallelogram, covering 26 and 1/2 acres. A 15-foot high fence of hewn pine logs, embedded six to eight feet in the ground, surrounded the prisoners, with sentry boxes, or "pigeon roosts" as prisoners called them, at 30-yard intervals. Approximately 19 feet inside the fence was the deadline, which the prisoners were forbidden to cross at the penalty of instant death. A muddy, shallow branch of Sweetwater Creek flowed through the yard, insufficiently supplying the water needs of the prisoners, and it was the source of much disease, as the Confederate latrine was located nearby outside the fence. Two gates were on the 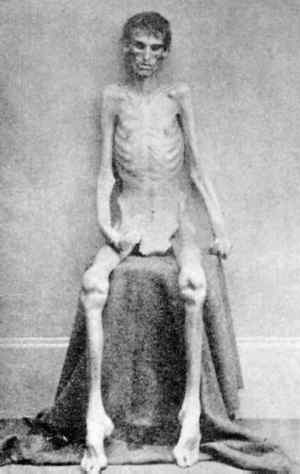 west side of the fort, and eight earthen forts with artillery surrounded the prison for the purpose of putting down uprisings on the inside or cavalry attacks from the outside.

Designed to hold 10,000 prisoners, the camp received its first shipment in February 1864. Prisoners continued to arrive by train at the Andersonville Depot, from where they would march 1/4 mile to the prison. During the next few months, approximately 400 prisoners arrived daily, swelling the population to more than 26,000 by the end of June and to more than 32,000 by August. Overcrowding was so severe that each man had less than four square yards of living space. Every tree was felled except two, leaving the prisoners with no protection from the elements, except for their rude shanty tents. The men were issued no clothing, so with freezing winter temperatures and hot summer temperatures, the men's clothing rotted away, leaving some men naked to the elements.

Worst was the lack of sanitation. The men were served by a small, muddy creek which became "a mass of liquid excrement" as it was used as a latrine outside the stockade by guards and inside the stockade by prisoners, who were more and more stricken with dysentery. Flies and maggots swarmed over the entire area, spreading disease which claimed the lives of up to 127 men a day. As the War produced deteriorating conditions in the South, prison officials had difficulty getting food to the camp due to transportation difficulties and a lack of resources. They often served unbolted corn, which acted like broken glass on the prisoners' deteriorated digestive systems. "Since the day I was born," said one prisoner, "I've never seen such misery." Wrote Father Hamilton of Macon, "I found the stockade extremely filthy; the men all huddled together and covered with vermin ... I found the Hospital almost as crowded as the stockade. The men were dying there very rapidly from scurvy ... diarrhea and dysentery ... they were not only covered with the ordinary vermin but also maggots ... they had nothing under them at all except the ground." Wrote Eliza Andrews of Washington, Georgia: "It is dreadful. My heart aches for the poor wretches, Yankees though they are, and I am afraid God will suffer some terrible retribution to fall upon us for letting such things happen. If the Yankees ever should come to southwest Georgia and go to Ander-sonville and see the graves there, God have mercy on the land!"

When Union Gen. W.T. Sherman captured Atlanta on Sept. 2, 1864, his cavalry troops were within easy striking distance, threatening Camp Sumter. This started the period of decline in importance of the camp, as prisoners were shipped out to South Carolina and coastal Georgia. The prison ceased to exist at the end of the war in May of 1865, and the camp's commandant Capt. Henry Wirz, was arrested and charged with conspiring with high Confederate officials to "impair and injure the health and destroy the lives ... of Federal prisoners" and "murder, in violation of the laws of war." A conspiracy never existed, but public anger in the North demanded retribution. Wirz was tried and found guilty by a military tribunal in Washington, D.C., and hanged. His arrest, trial, conviction and execution at the first war crimes trial remains controversial to this day.

In July and August of 1865, Clara Barton, founder of the American Red Cross, along with a detachment of laborers and soldiers and Dorence Atwater, came to Andersonville to identify and mark the graves of the Union dead. In one of the more extraordinary acts of the war, Atwater, while prisoner, was assigned to record the names of deceased prisoners for Confederate officials. Fearing the loss of the records at the end of the war, Atwater secretly made a duplicate copy of his list and hid it in his coat lining, hoping to notify the relatives of the more than 12,000 dead. Thanks to Atwater's daring act, only 460 of the 12,912 Andersonville graves had to be marked "unknown U.S. soldier." On August 17, 1865, an American flag was raised over the newly established Andersonville National Cemetery.