Because of Rome's location at the head of the Coosa River (where the Etowah and Oostanaula rivers meet) and rail connection to the main line between Atlanta and Chattanooga, the town was a rising center for manufacturing and transportation in northwest Georgia. The city became a major location for troop movements from 1862 through 1864. Rome's farms in the surrounding countryside supplied food for the Confederacy, the Noble Brothers foundry manufactured cannons and other military goods, and the city's hospitals treated thousands of wounded and sick. Because of its value to the Confederacy, Rome became a target of several Union military campaigns. In May 1863, Union Col. Abel Streight led a raid toward Rome, which was thwarted by Gen. Nathan Bedford Forrest. This raid led to the building of earthen fortifications around the city. In mid-May, while the Battle of Resaca of the Atlanta Campaign was underway, Union Gen. Jefferson C. Davis, with his 2nd Infantry Division, was looking for a bridge that didn't exist to cross the Oostenaula south of the Confederates in Resaca. Without orders, Davis decided 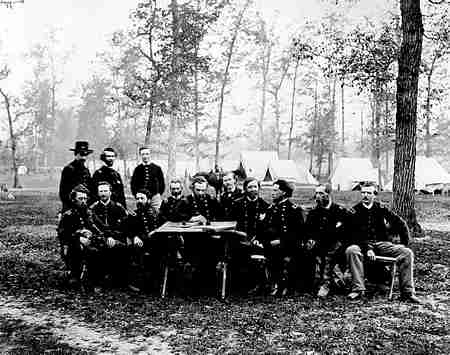 to push on to Rome, where he took the city on May 18, 1864. Davis told Sherman that Rome was "the strongest fortified place I have seen in Dixie." Union forces garrisoned the city during the Atlanta Campaign and strengthened fortifications after Gen. John Bell Hood moved north to strike at Sherman's supply lines after the fall of Atlanta. Sherman made Rome his headquarters in October and November 1864. From Rome, Sherman telegraphed U.S. Grant with his plan to "March to the Sea," and when it was approved, he burned Rome Nov. 10-11, 1864, then did the same to Atlanta four days later. Leaving Rome, he wired Gen. George Thomas in Nashville, "Last night we burned Rome, and in two or more days will burn Atlanta." Rome was the first to feel Sherman's wrath. Encampment and reenactment are held annually to commemorate the Siege of Rome.

Fort Norton, with intact earthworks and interlocking trenches, is located near the visitors center in Rome on Jackson Hill. After U.S. Col. Abel Streight's defeated raid on Rome in May of 1863 — stopped just west of the city in Alabama near the Lawrence Plantation — local residents were spurred to fortify the city. Later, their efforts came under the command of C.S. Gen. Braxton Bragg and his successor Joseph Johnston. Fort Norton, named for a local Confederate soldier who died in the War, saw action when troops in the fort fired cannon and shoulder arms on Union Gen. Jefferson C. Davis as he attacked the city. Union troops, who controlled the city and feared an attack from Confederate troops moving north under Gen. John Bell Hood after the fall of Atlanta, worked to improve the fortifications in 1864. A local effort is underway to study and conserve the fort.

First Presbyterian Church, dedicated in 1856, was used by Union troops for food storage and reportedly as a hospital during the Civil War. The pews were removed and used for the construction of a pontoon bridge across one of Rome's rivers and for the construction of horse stalls. Saint Paul A.M.E. Church was built in 1852 and used by occupying Union forces as a stable for their horses.

During the Civil War, Myrtle Hill was the site of Fort Stovall. Today, there stands an impressive Confederate monument marking the spot and commemorating the Floyd countians who gave their lives for the Confederacy. Near the base of the Myrtle Hill Cemetery, established as the second city cemetery in 1857, is a Confederate cemetery containing 363 Confederate and two Union soldiers. Close to the Confederate cemetery are two distinctive monuments: one to Confederate Gen. Nathan Bedford Forrest for saving Rome and the other to the Women of the Confederacy. In one of the greatest deceptions of the war, Forrest, with only 425 men, stopped U.S. Col. A.D. Streight and his 1,500 men in nearby Alabama on May 3, 1863. Forrest tricked Streight into believing he was outnumbered after a running battle of three days. (In an unusual innovation of the war, Streight's men were infantry mounted on mules.) Forrest was subsequently the toast of the town and presented with a fine horse and $1,000 to care for his sick and wounded. The monument was erected on the anniversary of the event in 1908. The women's monument is believed to be the first monument dedicated to women in the Western hemisphere. Erected in 1910, it honors the women who cared for the wounded and sick of both sides in the Civil War and is one of three major women's monuments in Georgia. Woodrow Wilson wrote one of the inscriptions. Notice the historical marker telling the story of John Wisdom, "Georgia's Paul Revere," a native of Rome who rode more than 60 miles from Gadsen, Alabama, to warn that the "Yankees are coming, the Yankees are coming!"

Built in 1836, this two-story red-brick academy on the National Register of Historic Places was Gen. Braxton Bragg's headquarters of the Army of Tennessee, from September 10 to 17, 1863, while he planned the Battle of Chickamauga. A stack of cannonballs honors him. Later, the building was in the line of fire during the Battle of LaFayette. On June 18, 1864, Union forces of approximately 450 men occupied the town to "endeavor to rid the country of several guerilla bands." On June 24 at 3 a.m., Union forces were attacked by Confederate Brig. Gen Gideon J. Pillow and his 1,600 cavalry. The next morning, Union reinforcements arrived after being alerted by an escaped Federal picket and drove off the Confederate attackers, leaving a total of 219 casualties from the battle. Tours are allowed by appointment only. The LaFayette Presbyterian Church was used as a field hospital by both armies during the Civil War.