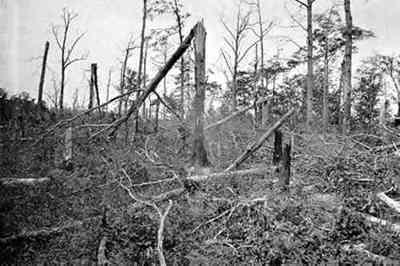 The area around Dallas, heading northeast to Pickett’s Mill State Park, was the scene of three desperate and bloody battles along the same line — New Hope Church, Pickett’s Mill, and Dallas — of the Atlanta Campaign from May 25, 27, and 28, 1864 respectively. Two were Confederate victories. Union Gen. W.T. Sherman tried to get around C.S. Gen Joseph Johnston and Allatoona Pass by leaving the railroad and moving southeast to Dallas, but Johnston responded by sidestepping his armies and placing them between the Union armies and Atlanta. The rough, wild countryside and narrow roads made maneuvering slow and difficult. For ten days along a ten-mile front, there was constant skirmishing and three major battles. At New Hope Church, Sherman believed he was beyond the left flank of the enemy and ordered an attack by Gen. Joe Hooker's men, who formed a column. Confederate Maj. Gen A.P. Stewart's division of Gen. John Bell Hood's corps poured deadly fire into the narrow front, inflicting heavy casualties until a violent thunderstorm erupted with heavy rain, stopping the battle. The next day, the opposing armies regrouped and entrenched. Sherman, with his love of flanking movements, ordered Maj. Gen. Oliver O. Howard's men to turn the Confederate right flank at Pickett’s Mill. The Union forces, lost and disorganized in the brushy thickets of the area, were slaughtered by Confederates under Patrick Cleburne. Two defeats convinced Sherman to move back north toward his supply line. Sensing a weakness on Sherman's right at Dallas, Johnston's Confederates probed the area to see if Sherman's forces were vulnerable to attack. A mix-up in signals led to a Confederate attack, which was destroyed by withering Union fire from entrenched Federal forces. Sherman eventually moved back north to Acworth, located south of Allatoona Pass but northwest of Kennesaw Mountain. Johnston took position across Lost, Pine, and Brush mountains.

A tour of this phase of the Atlanta Campaign should start at Pickett’s Mill, one of the best preserved Civil War battlefields in the nation and one of the few Confederate victories in the Atlanta Campaign. Guided and self-guided tours are available along three different routes through 765 acres of the battlefield, taking up to an hour and a half. You can see earthworks constructed by soldiers and the ravines where many men died. At the excellent museum and visitors center, a 17-minute video explains what happened at Pickett’s Mill. Don't miss your chance to see how you rate as a general in an interactive computer game which tests your skill in the heat of a battle. The Battle of Pickett’s Mill Living History Encampment takes place each year on the first weekend in June. 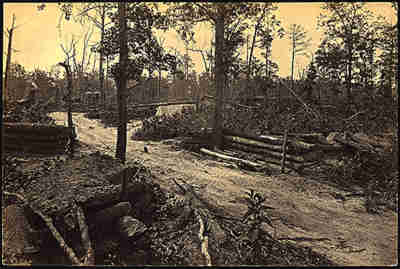 At the intersection of several roads is the "new" New Hope Baptist Church. Next to the church is the final Atlanta Campaign Pavilion, with a plaque and relief map explaining this phase of the Atlanta Campaign. Notice the WPA marker inserted in the large boulder dedicated to "the Northern and the Southern men who gave their all for cherished principles, undivided union, and state's rights, in the battle fought here in May 1864." Across the highway to the right is an old graveyard, where some Confederates took positions behind gravestones to hold off the attacking Union forces. The stone building to the left of the graveyard occupies the original site of New Hope Church. Across the highway to the left is a Confederate memorial next to some original trenches from the battle.