In the Allatoona area, you will find the ruins of an important iron furnace on the Etowah River, a visitor's center with Civil War relics and exhibits, and the site of the famous Battle of Allatoona Pass. During the Atlanta Campaign of 1864, Confederate Gen. Joseph Johnston retreated from Cassville to the steep, 1,000-foot high Allatoona mountains, a virtually impregnable natural fortress south of the Etowah River. The Western & Atlantic Railroad passed through a 65- 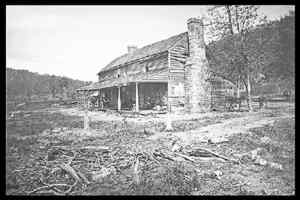 foot deep cut in the mountains here. Sherman, who was familiar with the terrain having surveyed it as a young man in 1844, spent several days in Kingston contemplating his next move. He decided to sweep his army around Johnston, travelling southeast on a network of primitive roads to Dallas. If they moved quickly enough, he could move from here on to Atlanta, perhaps unopposed by the Confederate Army.

After the fall of Atlanta, Hood moved his battered army north to threaten Sherman's supply line and draw him out of Atlanta. On Oct. 5, 1964, Hood's men attacked two forts on either side of the mountain cut at Allatoona Pass in a bloody and unsuccessful attempt to destroy the railroad here. The battle, with 30 percent casualties (Confederate Gen. Samuel G. French had 70 officers killed or wounded), was given extensive play in the Northern press. During the battle, Union Gen. James M. Corse signalled Sherman for help, whose reported famous reply — "Hold the Fort, I am Coming" — became a beloved hymn.

This museum features Civil War exhibits, relics, artifacts, and the story and memorabilia of Mark Cooper and his iron works. Outside the museum, walk to the dam overlook and notice the white obelisk on the right, called the Friendship Monument, erected by Cooper to 38 friends who loaned him $100,000 during the financial panic of 1857 to keep him solvent. In 1860, he repaid his friends and erected a monument in their honor. Markers nearby tell the story of Allatoona Pass. 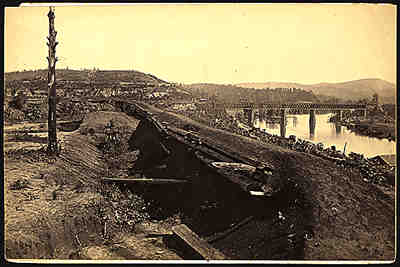 A beautiful park on the Etowah River south of Allatoona dam was the location of Mark Cooper's Etowah Iron Works, a rolling mill, flour mill, and factories for the production of guns, railroad iron, and tools, stretching more than a mile down the river. More than 600 people worked in these factories and lived in a town nearby called Etowah, which is now under Allatoona Lake. Cooper sold his factories to the Confederacy in 1862, which needed iron to fight the war. Found here are the remnants of an enormous stone furnace used to create more than 20 tons of pig iron a week. Union Gen. John M. Schofield's men destroyed the iron works shortly after C.S. Gen. Joseph Johnston abandoned Cassville on May 22, 1864. After the war, there was an attempt to rebuild, but the mill couldn't compete with the more modern northern mills. Notice the five stone bridge supports in the Etowah River. A retreating Johnston burned the bridge here, and it was never rebuilt. The "Great Locomotive Chase" raced across these supports on April 12, 1862, and Union raider Andrews in the General unwisely didn't destroy the bridge. Pursuing him was Fuller on a handcar, which he abandoned here to borrow the Cooper Furnace yard engine, Yonah, which motorized his pursuit to Kingston. 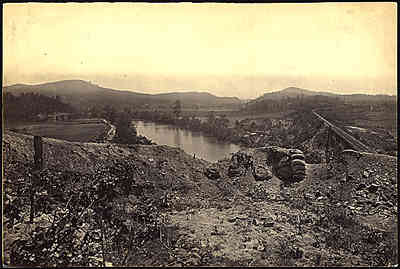 Park near the dam and walk northwest on a closed dirt road, the old railroad bed. As you enter the cut, marked by steep rock sides, notice the highest point, approximately 65 feet from the roadbed. On top of the cut on the left is the Star Fort or western redoubt, located on private property; on the right, approximately 250 yards up, is the eastern redoubt, located on U.S. Army Corps of Engineers property. The forts are in a remarkable state of preservation. The eastern redoubt can be reached on foot by a steep, unpaved road back near where you entered the cut. Across the Emerson/Allatoona Road is the Clayton/Mooney House, a private residence which was used as a headquarters prior to the battle and as a hospital after the battle to treat some of the 1,500 casualties. The house has bullet holes in the gables. Notice the marble gravestone commemorating 21 unknown Confederates killed at Allatoona Pass and buried on the grounds. Approximately 600 yards south of the house and across the railroad tracks is the grave of "An Unknown Hero" protected by a wrought iron fence.