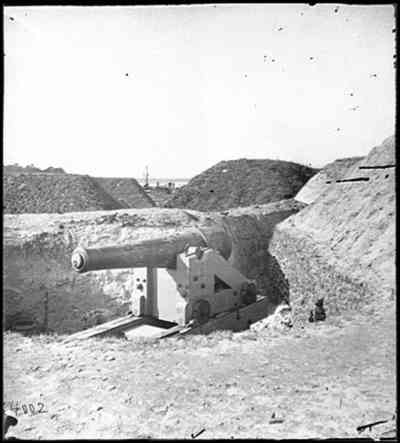 In sharp contrast to the strategic failure of the brick Fort Pulaski is the success of Fort McAllister, a Confederate earthwork fort on the bank of the Ogeechee River, which survived every attack from the sea. Fort McAllister defended the "back door" to Savannah for blockade runners. Built by Capt. John McCrady, the engineer who designed the defenses of Savannah, the fort survived seven attacks by Federal naval vessels, including ironclads, attempting to reduce the fort with the largest shells fired by a naval vessel in the Civil War. On Jan. 27, 1863, the Montauk, the second monitor-class ironclad constructed, led a five-ship armada up the Ogeechee to within 1,500 yards of the fort, and opened up its artillery. Captain John Warden, who had captained the original Monitor against the C.S.S. Virginia (or Merrimack) in the classic battle at Hampton Roads, Virginia, hurled 61, 15-inch shells at the fort over five hours. That night, the Confederates snuck out of their bomb proofs and filled the craters in with sand, making the fort as good as new. Frustrated, the Federals returned several other times, only to be disappointed with the results of their bombardment. Fort Mc-Allister was to fall, however, to Gen. W.T. Sherman's men, who stormed the fort from the mainland on Dec. 13, 1864. Sherman, frustrated at the defenses of Savannah, was desperate to open up a supply line from the Ogeechee River to his hungry troops, but Fort McAllister was protecting the entrance to the river. The fort's big guns were trained on the river, and it was garrisoned by little more than 200 men. The Union had approximately 4,000 troops, which simply overran the fort's defenses and fought the Confederates hand-to-hand. "The fort was never surrendered, it was captured by overwhelming numbers," reported C.S. Maj. George W. Anderson, who was in command of the fort. When C.S. Capt. 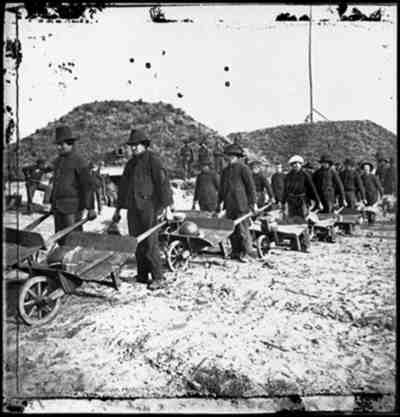 Nicholas Clinch was called on to surrender during the assault, he responded with a blow from his sword, and hand-to-hand combat ensued, with Clinch going down only after three saber, six bayonet, and two gunshot wounds. Capture of this fort sealed the doom of Savannah, which was evacuated Dec. 19-20, 1864. Considered to be the best preserved earthwork fortification of the Confederacy, today the fort is a 1,700-acre state park thanks to preservation efforts by automobile industrialist Henry Ford, who had timber interests here and a home in Richmond Hill. A museum is located at the site, which has books and a video related to the history of the area. Beside the parking area are large pieces of machinery salvaged from the wreck of the Nashville (or Rattlesnake), a Confederate blockade runner which was sunk by the Montauk. A living history event, The Civil War Soldier, is held yearly on Labor Day weekend.