[Fig. 8(4)] It measures only 541 acres, but Mount Jefferson State Natural Area has earned a reputation as a paradise for nature lovers. So much so that it was designated a National Natural Landmark by the National Park Service in 1975. Named after Thomas Jefferson and his father, Peter, who owned land in the area and surveyed the North Carolina/Virginia state line in 1749, the park features hiking and picnicking in the shadow of the mountain's summit. 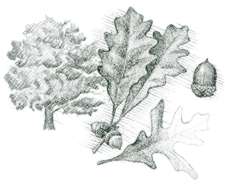 Geologists know that the basement rock of Mount Jefferson is part of the Ashe Metamorphic Suite, rock deposited 800 million years ago as a mix of eroded land areas and volcanic debris in the floor of an ancient sea. What remains a mystery is why Mount Jefferson towers 1,600 feet above surrounding stream valleys. The black amphibolite, which gives Mount Jefferson its distinctive dark appearance, is usually found in lower elevations and is susceptible to erosion. Mount Jefferson's other dominant rocks—gneiss and schist—have a higher percentage of quartz, which makes them generally more resistant to erosion, but here they are thinner than usual, making them physically weaker and, therefore, more likely to erode. Except they haven't eroded—at least not as much the surrounding, softer, more sedimentary layers of an ancient plateau worn down by the two forks of the New River. This is but one of the conundrums geologists face as they study the complex geology of Western North Carolina.

Typical of the stratification of wildlife in Western North Carolina, higher elevations are home to species usually found only in New England and Canada. The anomaly of northern species growing so far south is evident below Luther's Rock where large-toothed aspen, lettuce saxifrage (Saxifraga micranthidifolia), and the rare rusty cliff fern (Woodsia ilvensis) can be found.

When Elisha Mitchell noted in his diary in 1827 that he had never seen anything so beautiful as the view from the summit of Mount Jefferson, few were hardy enough to make the trip for themselves. In the 1930s, the Works Progress Administration constructed a road to the top, but over the years its state of repair and disrepair varied. The park finally achieved state park status in 1956, thanks to strong community support and generous donations. And the site was named a state natural area in 1994. Overlooks from the park road and Mount Jefferson's summit offer panoramic views into three states—Mount Rogers and Whitetop Mountain in Virginia, Snake Mountain in Tennessee, and Mount Mitchell and Grandfather Mountain, among others, in North Carolina. You can also see Pond Mountain, which holds the distinction of lying in all three states.

The Summit Trail, as its name implies, ascends .3 mile to the highest point on Mount Jefferson, where nearby overlooks provide spectacular views. The Rhododendron Trail, a moderate 1.1-mile loop trail that begins near the end of the Summit Trail, follows a horseshoe-shaped ridge southeast along the crest of the mountain to Luther Rock, which on clear days offers great views of the New River. According to local lore, the bluffs of black mica gneiss extending along the ridge below the trail served as stops along the Underground Railroad that led escaped slaves to freedom. The return portion of this loop trail descends to the southern slope of the mountain where trees sheltered from the cold northern winds grow tall. The trail passes through a virgin forest of large northern red oaks and the remains of American chestnuts. The Rhododendron Trail is also a self-guiding nature trail; interpretive pamphlets, available at the trailhead, teach about the natural environment, history, and legends of the area. Park rangers offer seasonal interpretive programs such as guided nature walks, talks, and demonstrations, and report that early June is the prettiest time to visit, when the purple blossoms of the Catawba rhododendron cover the mountaintop.