[Fig. 6, Fig. 4(3), Fig. 3(6)] Originally called "The Bluffs" after the surrounding cliffs of the Blue Ridge escarpment, Doughton Park was renamed in 1961 to honor Robert Lee Doughton, an avid Parkway supporter and longtime U.S. congressman. One of the larger tracts along the Parkway, Doughton Park features more than 30 miles of hiking trails crossing and circling its 6,000 acres. A network of seven trails winds through pastures and meadows, along streams and ridges, and into coves and valleys that create distinctive habitats rich in wildlife.

Isolation was a way of life when the Brinegar family built their self-sufficient homestead here. They farmed the land from the 1880s until the 1930s, when the National Park Service acquired it for the Parkway. Today, the Brinegar cabin [Fig. 6(6)] is a popular destination within the park. Other families settled along Basin Creek and Cove Creek, although their numbers were never large. Martin Caudill's cabin [Fig. 6(5)], which is visible from several vantage points, was built in 1895 and is one of the few to survive a devastating flood in 1916.

Large-toothed aspen (Populus grandidentata) (a rare sight in North Carolina, though the trees are common from Maine across to Minnesota), Carolina hemlock (Tsuga caroliniana), and Fraser magnolia (Magnolia fraseri) also grow here. In addition to the ubiquitous rhododendron and mountain laurel, witch-hazel (Hamamelis virginiana), sassafras, and dogwood make up the understory, with spring wildflowers such as violets, mayapple (Podophyllum peltatum), fire pink (Silene virginica), bluets (Houstonia caerulea), cinquefoil (Potentilla), and solomon's seal (Polygonatum biflorum) blooming beneath their canopy. Blazing star (Chamaelirium luteum) thrives near the visitor station, and rhododendron tunnels along numerous trails are renowned for their intense and colorful blossoms in early to mid-June. 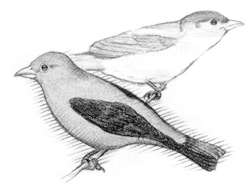 Basin Creek and Cove Creek offer approximately 5 miles of essentially wild trout fishing with some rainbow trout at the lower reaches. This area is classified as "special" by the National Park Service, which requires artificial lure on a single hook.