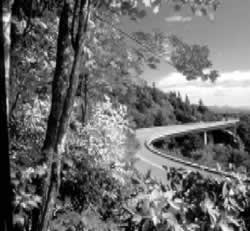 [Fig. 11(4), Fig. 8(18), Fig. 12(6)] In 1967, all but 7.5 miles of the Blue Ridge Parkway were complete. What became known as the "missing link" would take another 20 years to construct. The delay? A grand mountain and a commitment to its protection. The rugged boundary of Grandfather Mountain stood where customary construction practices said a road should be. After much controversy, North Carolina's then-Governor Dan K. Moore challenged National Park Service landscape architects and Federal Highway Administration engineers to break with convention. They were charged with finding an alternative to blasting through the edge of one of the most ancient mountains in the world. The solution was an engineering feat that resulted in a breathtaking monument to the coexistence of man and nature.

The construction process was an innovative one. The .25-mile-long viaduct was pieced together from above, segment by 8-foot, 50-ton segment, using a crane to virtually eliminate the damage that construction roads and heavy equipment would have imposed on the ground below. Only the drilling for the seven permanent piers that support the structure occurred on the ground, and, through the entire process, only the trees immediately under the viaduct were cut. The elevated bridge seemingly grew northward out of thin air, as each new segment was delivered to the edge of the existing segments, then hoisted over and down and secured into place. The latest computer casting technology was used to measure each uniquely shaped segment to within .0001 feet of accuracy, scientifically shaping the new man-made structure to the curves and contours of the age-old mountain. Finally, the concrete was tinted with iron oxide to make it less obtrusive against the pristine, quartzite summit.

The Linn Cove Viaduct was completed in 1983, and the rest of the 7.5-mile unfinished section of the Blue Ridge Parkway was in place by 1987. At an elevation of 4,100 feet, the viaduct coils like an S-shaped roller coaster track around the mountain's rocky perimeter, providing motorists with spectacular views through what feels like a soaring flight around the edge of the world.