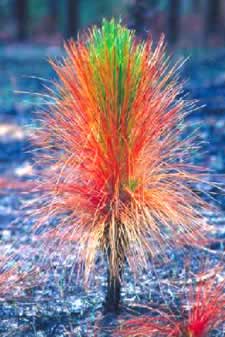 Like the longleaf pine-grassland ecosystem, Tall Timbers Research Station does not fall neatly within the confines of one state. Its buildings are in Florida, but its grounds stretch into Georgia, and its geographic focus is the Red Hills-a region bounded by the Ochlockonee and Aucilla rivers and the Cody Escarpment between Thomasville, Georgia, and Tallahassee, Florida. During the late nineteenth century, the Red Hills became a gathering ground for people who shared a passion for bird hunting-especially for the bobwhite quail. Hundreds of thousands of acres of land in the Red Hills have been managed for decades to produce quail for hunts during fall and winter, and Tall Timbers was once a quail-hunting plantation. Established in 1958 through the generous donation of Henry Beadel as a private, nonprofit, ecological research station, the Tall Timbers Research Station of today took inspiration and leadership from the superb naturalist, Herbert L. Stoddard. Fire ecology was a critical component of Stoddard's pioneering study of the bobwhite quail, and fire ecology became the organizing discipline of Tall Timbers.

Long-term pioneering studies of the effects of frequency and season of fire were started on the station. Eighty-four 0.5-acre plots were established in 1959 and burned at different intervals (from annual to complete fire exclusion) and during different seasons. These plots were invaluable demonstrations of the effects of fire at a time when fire was still viewed with considerable skepticism by many governmental land managers. A single 28-acre plot, NB66, was established in 1966 to track the course of plant succession following the elimination of fire from an open pine stand that had been burned for years. The documented changes in the bird and mammal communities on NB66 as hardwoods replaced the pines characterized widespread alterations to habitat throughout landscapes of the Southeast.

The Tall Timbers Fire Ecology Conferences, initiated in 1962, provided a crucial forum for scientists and land managers to air views and studies of the effects of fire on a wide variety of ecosystems around the United States and the world. Studies of the ecology and management of the longleaf pine ecosystem appeared in many of the published proceedings of the conferences and culminated in an entire conference devoted to the longleaf pine ecosystem in 1991. This conference assembled the foremost experts, both academics and practitioners, who covered a wide range of topics on the ecosystem from North Carolina to Florida to Texas.

Tall Timbers received an invaluable opportunity in 1979 when Mr. Jeptha Wade generously agreed to place 200 acres of his Arcadia Plantation into a conservation easement and provide Tall Timbers scientists with access to the site for research purposes. This event was significant for two reasons: This parcel-known as the Wade Tract-was one of the only old-growth longleaf pine stands remaining anywhere, and an easement was a relatively novel vehicle for private land conservation. To date, the Wade Tract has been the location of many scientific studies, the destination of numerous field trips for foresters, scientists, and students, and the topic of several newspaper and magazine stories.