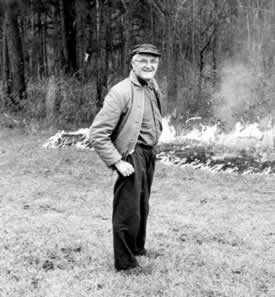 "Land management is an art that builds on history and is based in science."-Herbert L. Stoddard Sr.

Shortly after his family arrived in Chuluota, Florida from Rockford, Illinois in 1893-joining droves of northerners who heeded hyperbolic real estate promotions and struck out for the state's virgin swamps and piney woods-four-year-old Herbert L. Stoddard discovered his first bird's nest on the shore of Lake Mills. Despite the youngster's constant curious visits, the ground dove managed to hatch two eggs, and Stoddard was hooked. "None of the many thousands of birds' nests I have found since that day, some belonging to exceedingly rare birds, have thrilled me quite as much as that one," Stoddard wrote in his 1969 book, Memoirs of a Naturalist. "The discovery launched me on my career as a student of birds and marked my beginning as an ornithologist."

The richly diverse flatwoods and cypress-fringed lakes of the region awakened in Stoddard a keen fascination for other living things. The young naturalist's interests were encouraged by a neighbor named Mr. Barber, who, in the wake of Stoddard's father's death, became the boy's first mentor. "As I look back, I see clearly that such a man never dies," Stoddard reflected almost 80 years later. "His ideas live after him in younger men, to be passed down to succeeding generations."

Those words might just as well have been written to describe Stoddard himself. The child grew into a fine outdoorsman and self-taught ecologist, forester, and quail expert whose ideas on conservation evolved into a holistic land ethic that became a model for generations of like-minded land and wildlife managers.

Stoddard started a forestry consulting business in Thomasville, Georgia, in 1941 to advise private landowners on how to reap the benefits of longleaf pine timber without decimating the whole forest. Stoddard's method promoted single-tree selection or uneven-aged management, in which individual trees are cut while retaining a functioning, multi-generational ecosystem. Under such a management system, the forest is treated as an endowment from which a conservative, predefined percentage of trees is removed while the capital (standing stock) is allowed to accrue.

Also central to his plan was a strong belief in the use of fire as a management tool, a technique that sparked controversy if not contempt. U.S. Forest Service agents had for years denigrated burning, and the agency's Smokey Bear campaign, intended to curb careless and indiscriminate use of fire, served to turn public opinion against prescribed burns completely. Stoddard maintained that fire was essential to preventing pine forest succession to hardwoods, perpetuating fire-dependent flora and fauna, and allowing food sources for game animals to prevail over encroaching undergrowth. Landowners who practiced conservative cutting and frequent, variable burns determined by factors like season, wind pattern, and plants' growth stages learned they could reap benefits from their land indefinitely-in the form of timber, hunting, aesthetics, and whatever else they wanted to cultivate. 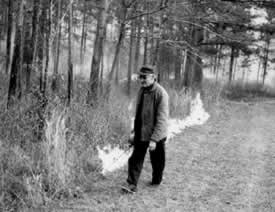 "At one time I was classed by many as an enemy of these forests because of my written and spoken insistence that the pine forests not only could be burned over frequently enough to maintain their natural vegetation and associated wildlife but indeed should be burned, for the safety and the healthy development of the forests themselves. I did my part in bringing about 'controlled burning,' or 'prescribed burning,' as a routine practice in large acreages of pineland," Stoddard wrote.

Milton Hopkins, a farmer in Osierfield, Georgia became acquainted with Stoddard in the 1940s, when both attended meetings of the Georgia Ornithological Society. Hopkins grows peanuts, corn, cotton, and pines on approximately 2,500 acres. He heard Stoddard promote burns for years, Hopkins says, and he saw the devastating effects of fire suppression combined with drought firsthand, when an accidental fire raged through the area near his home.

"A catastrophic fire from a steam engine in the 1950s turned into a huge crown fire," Hopkins remembers. "It jumped two railroad tracks and burned 1,200 acres. It killed everything in there, even pines 30 to 40 feet high." Unfortunately, folks in the area interpreted the disaster as evidence of fire's destructive effects and grew scared of burning. Hopkins continued to burn his longleaf pine forest, however, and says his neighbors have become accustomed to it. Burning has allowed him to reap continuous benefits from his land, he says.

Stoddard's expertise was also called into practice on quail- hunting reserves in the 1920s and '30s in southwest Georgia, where he led a biological survey of the quail's life cycle to understand declines in local bird populations. Stoddard and neighbor Henry ("Harry") Beadel incorporated the Co-Operative Quail Study Association in 1931, supplying plantation owners with advice on increasing quail numbers on their own lands and adding legitimacy to the term "wildlife management."

In 1950, Stoddard hired a young forester named Leon Neel, a recent University of Georgia graduate and Thomasville native. He taught Neel how to mark timber and how to burn, and in 1963 the two formed an official partnership in the forestry consulting/ wildlife management business. Leon, now in his 70s, continues to manage private lands under the terms of the Stoddard-Neel method, a conservation ethic that puts biodiversity and a healthy ecosystem before economic returns off the forest. The owner can make money off his or her land, but over time and through selective cutting, not in the lump-sum payments afforded by clear-cuts on pine plantations.

"We can always cut timber, and we've always got a healthy ecosystem going," Neel explains. "There's never a choice between the two, because our system builds a situation where you maintain the ecosystem and yet you get an economic return off it.

"He was a fine man," Neel says of Stoddard. "He was tough but he was gentle. There was no foolishness about him. He was smart and focused. He knew so much, and he'd been so many places. It was just a great experience."

"I think they have done more together-Mr. Stoddard and then Leon-than anyone in the Southeast for furthering sustainable forestry and the longleaf pine," says Hopkins.

In 1957, Harry Beadel, a sportsman and amateur naturalist, donated property in Tallahassee for the creation of Tall Timbers Research Station. Stoddard and Ed Komarek, along with Leon Neel and Roy Komarek, turned the land into a model working landscape where sustainable forestry and consumptive use could coexist. Tall Timbers continues to generate information on land management and conservation in the Red Hills area, data it hopes to see applied regionally and nationally.

Herbert Stoddard's conservation ethic provided a fine example for current proponents and managers of longleaf pine ecosystems. "I have learned that without Nature man has nothing," he wrote in 1969, one year before his death, "and my greatest desire would be satisfied if I could know that my grandchildren, and their children after them, will develop a love, an understanding, and an appreciation of the natural world. They can find no greater satisfaction in life."