Alexander Hamilton Stephens, a native Georgian, was a major figure of the Civil War, serving the Confederacy as vice president. A.H. Stephens State Historic Park features his home Liberty Hall, his gravesite, and an excellent Confederate Museum housing one of the finest collections of Civil War artifacts in the state. Stephens was born in a log cabin near Crawfordville and orphaned by his parents. Nicknamed "Little Aleck" or "the Little Giant," Stephens was 5 feet, 7 inches tall and seldom weighed over 90 pounds, and usually in frail health. He was raised and educated by an uncle, Brig. Gen. A.W. Grier, a distinguished soldier in the Indian and Mexican wars. Stephens graduated in 1832 at the head of his class at Franklin College (now the University of Georgia) and taught school for two years before returning to Liberty Hall to study law. From 1836-50, he was a member of the Georgia State House of Representatives, and in 1842 he was 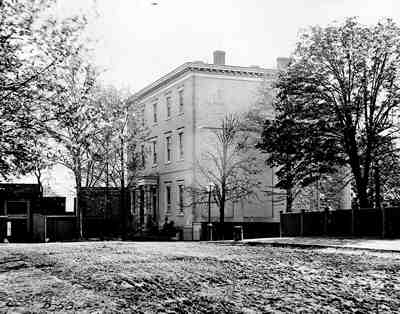 elected to the state senate. From 1843 to 1859, he served as a member of the U.S. House of Representatives, helping to pass the Kansas-Nebraska Act, and in 1860 was Presidential Elector on the Democratic ticket of Douglas and Johnson. In 1861, Stephens opposed secession at the Georgia Secession Convention in Milledgeville, but supported his state's decision once it passed, and he was elected vice-president of the Confederacy in Montgomery, Alabama. He helped draft a moderate Confederate constitution, worked for prisoner exchanges, and opposed Davis' centralization of power and suspension of civil rights. He was Commissioner of the Confederacy at the Hampton Roads Conference in February of 1865, where he met with Lincoln to negotiate for peace.

Stephens was arrested at Crawfordville and imprisoned at Fort Warren in Boston Harbor, Massachusetts for half a year. After the war, he was again member of the U.S. House of Representatives from 1873-82, then served as governor of Georgia briefly until he died at the age of 71 in Atlanta on March 4, 1883. Briefly interred at Oakland Cemetery, his body was reinterred at his beloved Liberty Hall property in 1884. He wrote Constitutional View of the Late War Between the States, as well as other books on U.S. history. His home has been restored to excellent condition, and many of Stephens' effects and furniture are found in the house, including his complete bedroom furnishings. Notice all of his medicine bottles. In the backyard is a grave and monument to a favorite family pet, Rio. In front of Liberty Hall is a flattering statue of Stephens and some interesting inscriptions. The museum has more than 300 fascinating items relating to the Confederacy and A.H. Stephens.

During the Civil War, a factory which produced Leech and Rigdon pistols operated in Greensboro, west of Crawfordville. From 1863-1865, the town was also the home of several Confederate hospitals. In the Greensboro City Cemetery (off the Penfield Road) are buried approximately 45 Confederate soldiers, men who died locally of wounds or disease.

On GA 47 between Sharon and Raytown is the gravesite of Gen. Aaron W. Grier. Two miles northeast of Sharon on GA 47 is a historical marker titled "Ray's Place — Now Raytown." The parents and grandparents of Jefferson Davis owned plantations near Rayton in the early 1800s. Mrs. Davis, fleeing Federal forces in 1865, spent a night in Raytown.