Through this general area marched the Right Wing of Sherman's army, the 15th and 17th corps, as it made its way to the sea in late 1864. In Stockbridge, Sherman 's army met its first resistance when it clashed with the Orphan Brigade, approximately 1,000 men who had become mounted infantry assigned to C.S. Gen. Joe Wheeler. Almost all of the battles during the "March to the Sea" would be running cavalry fights between Wheeler's cavalry and U.S. Gen. Judson Kilpatrick's cavalry. In general, it would be impossible for Wheeler's much smaller force to halt the flow of 60,000 Union troops to Savannah, but Wheeler, the native Georgian famous for fighting with reckless abandon, would harass them nonetheless.

In McDonough, the Right Wing burned two churches, slaughtered animals in another, and camped near town on Nov. 16, 1864. The Old Globe Hotel on Jonesboro Street, constructed in 1833, remains from this period. To the west, Georgia Militia, with 2,800 men under Maj. Gen. Gustavus W. Smith, prepared for anticipated attacks at Lovejoy's Station, then Griffin, then Forsyth, and eventually Macon, keeping pace with the Right Wing but not engaging it. The Right Wing was protected by Kilpatrick's cavalry, whose mission was to protect the western flank of the march 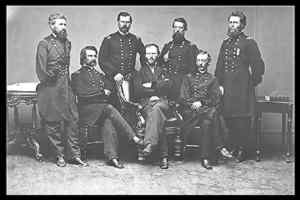 ing column. Federal cavalrymen feigned at Griffin, Forsyth, and Macon, deceiving the Rebels into thinking these were the targets of the Federal forces. On Nov. 17, the Right Wing marched to Jackson in Butts County, where they did an estimated $1 million worth of damage, destroying everything on the courthouse square except the Masonic Hall, and camped for the night. At High Falls State Park, mill ruins can be found by an old bridge over the Towaliga River. Factories were once located here, until Wheeler burned them as he retreated toward Forsyth. The Right Wing, consisting of approximately 30,000 men, invariably had to split up taking different routes as it worked its way southeastward. One part of the Right Wing camped at Indian Springs on Nov. 18, 1864. They visited the Indian Springs Hotel, located on Highway 42 near Jackson, which was built in 1823 by Creek Indian Chief William McIntosh. The hotel is open to tours. The entire Right Wing crossed the Ocmulgee River at Planters Factory and continued its march through the Monticello area, which today is the site of many beautiful historic homes. A tour guide is available from the Chamber of Commerce.

Farther to the east, part of the Left Wing went through Eatonton and the surrounding area. Eatonton was briefly looted by the fleeing Lt. Col. Silas Adams brigade from the Stoneman-McCook Cavalry Raid on July 31, 1864, and on Nov. 20, 1864 Sherman 's men returned, tearing up track and destroying the nearby Eatonton Factory. Today, Eatonton has some fine antebellum homes worth touring, but it is best known as the home of Brer Rabbit and the Uncle Remus Tales. Joel Chandler Harris was born in Eatonton in 1848, and growing up he heard wonderful tales spun by slaves. Harris later became a newspaperman in Atlanta, and he wrote down the stories which became classics of literature and popular Walt Disney movies. His home, the Wrens Nest, is open to tour in Atlanta at 1050 Ralph David Abernathy Blvd. 404-753-8535. In Eatonton you find the Uncle Remus Museum, a log cabin museum formed from two original slave cabins, representing the home of Uncle Remus. The real Uncle Remus is believed to be "Uncle" George Terrell, a Putnam County slave who regaled local youth with his stories brought over on slave ships from Africa.