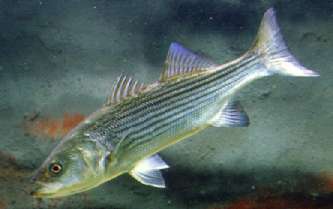 One of the most impressive game fish because of their immense size, stripers are fast becoming popular fish in Georgia. Stripers, or striped bass (Morone saxatilis), are similar in appearance to white bass except for their more prominent stripes, or black-brown longitudinal lines, that run down the length of the fish and their more slender appearance.

In their native range, which includes Georgia's coast, stripers enter the coastal streams and rivers during their spring spawning runs where they may travel as far as 100 miles upstream to spawn, searching for areas with rapids and strong currents. Unlike trout, which lay their eggs in a gravel bed, stripers don't make beds, but spread their eggs in a water column The current of the river is critical for the eggs' survival. If the current slows, the eggs, which are suspended in the water, will settle to the bottom, become silted over, and die. Because of this, dams interfere with the spawning efforts of stripers. For spawning to be successful, the eggs have to flow in the current for approximately 40 hours until the eggs become hard and float on the water's surface.

Stripers found their way into the Chattahoochee north of Lake Lanier after they were stocked in Lanier and began moving up river. The population on the lower section of the Chattahoochee was originally released in West Point Lake.

Unlike other possible predatory fish like largemouth bass, stripers can survive in cold water. While the colder trout waters have deterred most predatory fish from reaching and impacting the Chattahoochee's trout fishery, stripers haven't been deterred.

Stripers will prey on trout. In fact, many striper fishermen in Lanier use live rainbow trout fingerlings for bait because of the stripers' preference for the young fish.

The DNR is currently getting public input on the possiblity of stocking striped bass into West Point. Stripers continue to be stocked in Lake Harding (also called Bartletts Ferry Lake), however. The numerous dams between that lake and the trout fishery in Atlanta prevent any stripers from moving up that far and endangering the trout.

Stripers, which are more active at night, will feed on whatever is plentiful at the time. In the Chattahoochee below Morgan Falls Dam, stripers feed on a lot of crayfish, but they will eat anything that comes in their path including shad, carp, and trout. Stripers tend to hang out in the cold water refuges of the river's tailwaters or near wastewater effluents of sewage plants where shad can often be found. In reservoirs such as Lake Lanier, stripers are often found in deep waters and feed heavily on shad.

Stripers are an excellent game fish because of their size and are a popular game fish of Lake Lanier, says Jimmy Jacobs, author of Trout Fishing in North Georgia.

"Hundreds of stripers in the 20- to 30-pound range are caught in Lanier each year.

Stripers have become a glamour fish, because nowhere else in the state can you catch fish that size," he said.