The Price of Development in Atlanta: Giving New Meaning to the Name Hotlanta 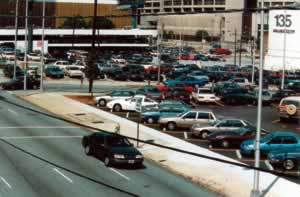 A study conducted by American Forests, a Washington, D.C.-based conservation organization, looks at Atlanta's changing urban ecosystem from 1972 through 1993. American Forests gathered data from satellite images, aerial photography, and on-the-ground checks and analyzed the changing landscape's effect on the city's infrastructure using Geographic Information System software. The results show that changes in Atlanta's temperature, stormwater flow, water quality, and energy use are directly attributable to the changes in the land. The findings also place a dollar amount on natural resources that developers sometimes take for granted, like the value of using trees to reduce runoff instead of building retention ponds. 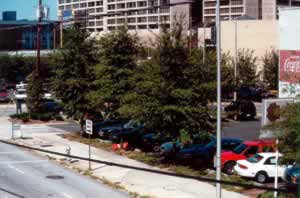 In one of the most alarming conclusions from the study, American Forests found that the 10-county metro area has lost 60 percent of its natural tree cover and vegetation since 1972, with one-third of that loss occurring since 1986. The pavement and buildings that replaced the natural ecosystem don't leave a way for stormwater to filter underground, and as a result, more of that storm water, carrying pollutants, rushes into metro waterways. Focusing on the loss of land cover since 1986, the Atlanta Journal-Constitution reports that American Forests estimates stormwater runoff has increased by 7.4 billion gallons for each major 24-hour storm that hits Atlanta with more than 3.5 inches of rain.

The loss of trees is also turning Atlanta into an urban heat island, a name scientists give to cities where the rocklike land cover elevates temperatures by several degrees. In 1972, Atlanta's heat island areas were small and centered on downtown and the airport, but today the area is expanding to include downtown, the airport, development centers in the northern counties, and the transportation corridors in between. Summer temperatures can reach as high as 9 to 12 degrees hotter in the urban heat island than in the surrounding countryside. As a result, power companies have to work harder to cool down the city during peak loading times. American Forests estimates that the heat island effect has increased energy use in downtown buildings by 4 percent. Analysis of the energy conservation benefits of the existing trees in Atlanta shows they offer the city $7.5 million per year in direct energy savings.

Related to heat is air pollution. Scientists at the Lawrence Berkeley Lab in California estimate that 6 percent of the air quality problems in cities like Atlanta is the result of heat. Remember that day in chemistry class when you heated a test tube of air over a Bunsen burner and the air changed colors? The same type of chemical reaction is taking place over Atlanta. The heat cooks the air and changes its chemistry to produce smog and other pollutants. "Six percent of air pollution is strictly related to temperature," says Gary Moll, a vice president of American Forests and its study's coordinator.

Recognizing the consequences of loss of tree cover, Marcia Bansley, executive director of Trees Atlanta, mobilizes an army of volunteers to replace some of the green that has been lost to development. "We're trying to make the city livable again," Bansley says. She says trees are not only essential to restoring land, water, and air quality, but they are also important to people's emotional health. Trees not only help us breathe easier Bansley says; seeing them makes us feel better.

Since 1985, when Trees Atlanta was founded, the over 800 people involved in the group have planted more than 10,000 trees and helped protect countless trees from development. During fall and winter weekends, volunteers plant urban-tolerant hardwoods in metro area neighborhoods, at schools, along roadsides, and wherever else they are needed. Trees Atlanta works with the University of Georgia School of Agriculture to determine which trees will grow best in urban soil that is usually compacted and low in oxygen. Primarily, they plant maples, oaks, elms, magnolias, and hollies.

Trees Atlanta also offers seminars for developers and others to demonstrate how to save trees on construction sites. One success story includes saving a group of 120-year-old trees along Peachtree Street by showing a developer how to build a new parking lot in a way that allowed the trees to stay and to receive the oxygen and water they need to survive. As an added benefit, the developer is saving one-third of his air-conditioning costs by preserving the trees on the west side of his building.

"You have to be creative in your development in order to save trees," Bansley says, and if we are not and we destroy our natural resources, the quality of life in Atlanta will suffer. "We're destroying everything that's left here worth having," Bansley says.

American Forests chose to study Atlanta because the city has a lot to lose. "Atlanta is probably the fastest growing metro area in the country for change of land cover purposes," says Moll. "We knew we would be able to see changes in the urban ecology because things are happening so rapidly."

Moll hopes the study will be useful in the planning process aimed at preventing such drastic land cover changes in the future. His organization hopes to apply the techniques it used in Atlanta to other cities to help them determine the value of their trees and to encourage preserving them.

"We wanted to create a way to put natural resources into the planning process. It is a study not just for people interested in ecology but also for planners," says Moll. "What we learned is that natural systems provide us lots of benefits. They help control storm water and temperatures, and they save us energy. Nature will work for you if you find a way to work with it. Now that 60 percent of the tree cover is gone, Atlanta needs to learn to work like nature. We can do some things with design that nature does naturally."