[Fig. 18(3)] A visit to The Conservancy Briggs Nature Center means a chance to learn about and explore many of the distinct native habitats and wildlife found in Southwest Florida from the comfort of an elevated boardwalk. An interpretive center and a butterfly garden add to the educational opportunities.

Over the past several decades coastal development has destroyed many of South Florida's vital estuaries, where fresh water from the land meets and mingles with ocean salt water. Only in recent years have substantial efforts been made to preserve these irreplaceable resources. A campaign to save Rookery Bay, 10 miles southeast of Naples, began in 1966 when a small group of concerned individuals grew alarmed at the area's proposed development. Two years later, the citizens group incorporated as the Collier County Conservancy became The Conservancy of Southwest Florida.

In 1978, the conservancy's dedicated efforts paid off. Rookery Bay was designated a National Estuarine Research Reserve, under management of the Florida Department of Environmental Protection. The Briggs Memorial Nature Center, which opened to the public in 1982, serves as the reserve's interpretive center.

An elevated 0.5-mile boardwalk takes visitors through the 12,700-acre reserve's six environmental communities: oak scrub, pine flatwoods, wet hammock, fringe marsh, brackish pond, and mangrove fringe. Before you set off, walk through the interpretive center's Butterfly Garden and see how many of the native plants and 27 species of butterflies you can identify. The boardwalk is circular and goes through four of the communities twice, although information at each numbered station is different. During the November to March winter season, staffers are on the boardwalk to answer questions and point out things of special and unusual interest.

The oak scrub community grows upon ancient dunes, sand bars, and beaches formed tens of thousands of years ago when sea levels were much higher. Named for the scrubby, stunted nature of its vegetation, the oak scrub's dominant trees and shrubs are Chapman's oak (Quercus chapmanii), myrtle oak (Quercus myrrtifolia), and sand live oak (Quercus geminata).

The sandy soil is devoid of many nutrients and fails to trap and hold moisture. Plants and animals that live in this environment have adapted to the heat, drought, and fires. The oaks spread their roots laterally through the soil to absorb water more easily. Their thick waxy leaves are also designed to retain moisture. 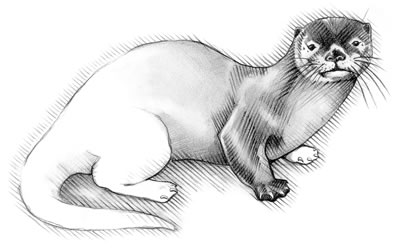 The Florida wild rosemary (Ceraitola ericoides) is a member of the crowberry family not related to the herb rosemary used in cooking. Like other scrub oak plants, Florida wild rosemary's growth habits are similar to those of plants from Mediterranean climates. Small, hard, shiny, and waxy leaves prevent excessive desiccation, drying out that could be harmful or fatal to the plant.

Saw palmetto (Serenoa repens) looks at first like a bush, but it's actually a tree, growing up to 6 or 7 feet high, with its trunk deeply rooted underground. Anyone who has ever been jabbed or sawed by the palmetto's prickly edged leaf clusters knows where the plant gets its name. Like slash pine, it is remarkably fire resistant. As quickly as the flames are doused, new green shoots generate from the trunk's undamaged parts.

A large variety of lichens grow on the scrub community's trees and on the ground. Walking through the oak scrub, your feet crunch on grayish popcorn lichen. Lichens are made up of algae and fungi that live together in a mutually beneficial relationship called symbiosis. Fungi wrap around the algae and absorb water, minerals, and organic matter from tree bark, rocks, and soil. Algae in turn produce carbohydrates through photosynthesis.

The threatened Florida scrub jay (Aphelocoma couerulescens) is one of the most celebrated residents of the community. A member of the crow and jay family, and related to a species of California scrub jay, the turquoise and white scrub jay gained notoriety in the 1970s as the first known animal species to practice "helper at the nest" behavior, which scientists have since discovered in other bird and animal species. Birds that don't mate during their first season as adults remain at the nest and help their parents raise their siblings. This gives the young a better opportunity for survival and provides the helpers with on-the-job experience. Due to limited habitat, some of the young stay with their families for several years. Unlike common blue jays, scrub jays are nonaggressive and frequently perch in nearby trees as if posing for pictures. They will also show up for handouts at the reserve's picnic tables.

The pine flatwoods community is dominated by slash pines that attain their height of 100 feet or more because the elevation of their habitat is slightly decreased and the sandy soil contains more nutrients than soil in the oak scrub community. The open environment makes it an attractive habitat for over 100 animal species, including owls, warblers, woodpeckers, green anole, Cuban anole, Southeast five-lined skink, gopher frogs (Rana capito aesopus), Florida mouse (Podomys floridanus), and Eastern indigo snake.

Fast as proverbial greased lightning, green anoles (Anolis carolinensis) use their speed to evade a host of potential predators. Like chameleons, they can change colors in a matter of seconds. Skinks have detachable tails. If a predator bites it off, the skink quickly grows a new one. The threatened blue-black indigo snake is North America's largest nonvenomous reptile, growing to a length of 8 feet. Its reddish or blackish jaw and larger size differentiate it from the similar black racer (Caluber constrictor), which grows to about 4 feet. Both species immobilize small animals with their powerful jaws. Destruction of gopher tortoise burrows, which the snakes and other animals use as dens and fireproof shelters, is a major reason for the indigo's decline.

The wet hammock community is an environment rich with lush vegetation. A lower elevation makes it the recipient of water runoff from surrounding lands. As a result, the soil contains more organic materials than that in the oak scrub and pine flatwoods. These conditions foster the growth of a dense, intertwined thicket containing plants such as wax myrtle, dahoon holly (Ilex cassine), red bay (Persea borbonia), leather fern (Acrosichum danaeifolium), swamp fern (Blechnum serrulatum), and poison ivy (Toxicodendron radicans).

Cabbage palm, also known as sabal palm, which is the Florida state tree, thrives in the wet hammock's drier areas. Some cabbage palms have smooth trunks, and others are girdled by old leaf stems called "boots" or "jacks" because they look so much liked an inverted bootjack. The jacks trap debris and moisture, enabling algae and fungi to grow. They, in turn, provide a hospitable environment for serpent figs, a type of epiphyte. The cabbage palm's edible center—its heart—is a gourmet delicacy that tastes mildly like cabbage. When the heart is removed, the tree dies.

Many of these plants have proven beneficial to animals and humans. Indians and early white settlers made tea from wax myrtle bark as a remedy for dysentery, ulcers, gastritis, and other stomach ailments. Birds feed on the wax myrtle's small, green, wax-coated berries, and humans use the berries to make fragrant candles. Birds also feed on the bright red berries of the dahoon holly and poison ivy.

Also commonly found in the hammocks, the leather fern is the largest American fern species. Its tough, leathery leaves can be more than 14 feet long, and they have adapted to tolerate salt and intense heat. Scientists studying fossils say contemporary leather ferns are similar to those that vegetarian dinosaurs fed on millions of years ago.

The rustling you might hear in the dense vegetation could be made by a nine-banded armadillo (Dasypus novemcinctus), a species that has migrated from Mexico and Texas across the southeastern United States, as far north as Tennessee and North Carolina. Like a medieval knight, the armadillo is clad in an armored exoskeleton. Bony silvery brown plates sheath its upper body, tail, and the top of its head. It looks as slow and cumbersome as a World War II tank, but when it senses danger it can run away surprisingly fast. It can also roll up into a tight ball to protect its soft, unarmored belly. An armadillo's sharp claws can dig a burrow with lightning speed. It's a strong swimmer, which explains its presence on many Florida and southeastern U.S. barrier islands. It mates in summer, and each litter, born the next spring, has identical quadruplets.

The fringe marsh community is a blend of salt water and fresh water marshes, with open expanses of sawgrass and black rush. High tides generated by storms bring in salt water, and tropical summer rainfall adds fresh water. Sawgrass (Caldium jamaicense) a freshwater species, dominates the first half of the marsh. Halophilic, salt-tolerant black rush (Juncus roemerianus), dominates the second half of the marsh, closer to the source of the high tides.

The marsh is a teeming city of birds, fish, and insects. Mosquitofish gobble up mosquito larvae, inadvertently fattening themselves into a feast for bigger fish and birds. Turtles and crayfish sate themselves on the numerous marsh grasses. Dragonflies go after insects and worms and become snacks for ospreys, bald eagles, turkey vultures, black vultures, and red-shouldered hawks gliding through the air currents above.

A black vulture (Coragyps atratus) can be distinguished from a turkey vulture by its white wing patches and short, stubby tail feathers. The turkey vulture has two-toned, pale, silver and black wings and a longer tail. Both have large wingspans—from 5 to 6 feet—and feed mainly on carcasses of dead animals. They also kill lizards and snakes and pilfer other birds' eggs and nestlings.

Large mammals in the fringe marsh include the raccoon (Proycon lotor), a mostly nocturnal roamer whose wanderings can be traced by its five-toed front and hind footprints. Its black mask is nature's way of characterizing this wily thief, which raids bird, turtle, and reptile nests and comes brazenly into picnic areas and subdivisions to forage. Cute as they are, raccoons frequently carry rabies and contact with them should be avoided.

River otters leave a wide meandering trail in the mud. These playful creatures can often be seen chasing fish and each other through the shallow water. You're far less likely to see a bobcat (Lynx rufus). North America's most common species of wildcat hunts by night and by day hides in the shady trees of the fringe marsh and wet hammock.

During summer, The Conservancy of Southwest Florida offers day camps for young people who can learn about the natural environment, canoeing, map and compass reading skills, and other skills that will make them more comfortable in the outdoors.