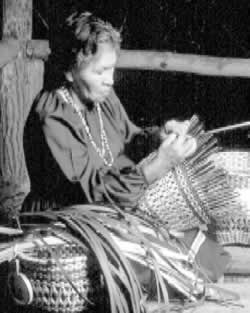 Qualla Boundary of the Eastern Band of the Cherokee

The Cherokee and their predecessors were the region's first naturalists. For thousands of years before European settlers arrived, these native inhabitants hunted, fished, and farmed a vast territory. In the process, they amassed an encyclopedic knowledge of the indigenous plants and animals, and an equally comprehensive grasp of the rugged landscape they inhabited, with its specific weathers and seasons.

Today, about 11,000 of their descendants carry on some of these Native American traditions within the 56,000 acres of the Cherokee reservation known as the Qualla Boundary (Qualla is the Cherokee approximation of Polly, the name of a settler who once lived in the area) and in neighboring communities in Cherokee, Graham, and Swain counties. With its wide variety of cultural, recreational, and tourist attractions (clustered in Cherokee, North Carolina, just a few miles from the Oconaluftee Visitor Center in Great Smoky Mountains National Park), Qualla Boundary makes a convenient base of operations for visitors to the area.

To archeologists, the earliest inhabitants of these mountains are variously known as the Pisgah Culture, the Hiawassee People, the Upper and Middle Valley People, and so on. Opinions vary as to when the Cherokee emigrated to the area, but they had a thriving and sophisticated culture in place when Hernando De Soto came through in 1540.

At its height, the Great Cherokee Nation, the largest of all the southern tribes, had an estimated population of 25,000 and included some 135,000 square miles, extending from the Ohio River as far south as Alabama.

Like most native peoples, the Cherokee (who identify themselves as Ani Yunwiwa, "The Principal People") lived in harmony with nature. These wise stewards allocated much of the land they controlled for hunting and religious uses, concentrating their activities in towns. They built rectangular log houses, and each town also boasted a much larger council house. On their extensive, communally held farms, they raised corn, beans, squash, and potatoes and even cultivated peaches.

The Cherokee, however, also manipulated their environment, such as using controlled burning to clear farmland and give hunters easier access to game. Some have even theorized that the burning helped create the distinctive, treeless southern Appalachian balds, whose origins are still in dispute. In any case, the burning did enrich the soil and encourage certain species, such as pines and nut- and acorn-producing trees.

The Eastern Band of the Cherokee developed in reaction to the infamous Trail of Tears, when 18,000 Cherokee were forcibly removed to Oklahoma by the U.S. Army in 1838 (more than 7,000 died en route). But some determined holdouts stayed behind, hiding out in remote coves and valleys. Eventually, they were granted formal recognition by the same government that had brutalized them, and their descendants keep this ancient culture alive in their beloved "Land of the Blue Mist."

The Oconaluftee River (a corruption of the Cherokee word Ekwanulti, meaning "Place by the River") follows the Oconaluftee Fault through the Smokies, from the Newfound Gap area to Smokemont. The shattered rocks created by the fault eroded more easily and gave way to form the beautiful Oconaluftee River Valley. Descending from the Smokies, the river cuts across Cherokee lands before joining the Tuckasegee River near the Ela community (Cherokee for "earth"). Just below the confluence is the approximate site of the ancient Cherokee town of Katuwha, perhaps 1,000 years old. (The remains of a ceremonial mound are visible behind an old airplane hangar along US 19, just outside the Qualla Boundary.)

Water figured prominently in Cherokee religious ceremonies, and it is an abiding presence on Qualla Boundary lands, where several picturesque waterfalls can be seen. The best-known waterfall is 150-foot Mingo Falls. One of the more spectacular cataracts in the Smokies, it can be reached via an easy 10-minute stroll from the Mingo Falls Campground on Big Cove Road, 5 miles outside the town of Cherokee. The smaller, less-accessible Soco Falls, partially visible in winter from US 19, hosts many wildflowers growing at its base. Inquire at the Visitor Center in Cherokee (US 19 at Business 441) for more information about these and other nearby falls.

An easy way to explore local flora is to visit the Cherokee Botanical Garden [Fig. 44(4)], which features an herb garden among its more than 16,000 plants. Some 150 species are identified along the gentle, .5-mile loop trail, which winds through a mixed-pine and hardwood forest along the slopes of Mount Noble and past an old Cherokee cabin and offers periodic scenic views.

Adjacent to the Botanical Garden on US 441 is Oconaluftee Indian Village. Much of the inner life of contemporary Cherokee communities is invisible to the casual tourist, but a visit here provides a vivid introduction to traditional ways. Indians in native costumes serve as guides through a recreated eighteenth- century village, complete with rustic log cabins, a sweat lodge, and a seven-sided Council House. Cherokee crafters chip flint into arrowheads, carve spoons and bowls, and practice traditional basket making, fingerweaving, and bead work. Visitors can even see a dugout canoe being hollowed out the traditional way, using fire and heavy axes.

Down the hill from these attractions (US 441 at Drama Road) stands the Museum of the Cherokee Indian [Fig. 44(5)]. More than 20 audiotape and videotape presentations, including six mini-theaters, lead viewers through some 10,000 years of indigenous history. Among the museum's treasures are a rare eagle-feather coat and a 250-year-old dugout canoe.

Here visitors can learn about Cherokee mythology and history, including such little-known highlights as the Thomas Legion, a band of Cherokee soldiers who fought under Confederate Colonel William Holland Thomas during the Civil War. Thomas, a European trader who spoke and wrote Cherokee, was adopted by Chief Yonaguska and eventually elected chief of the Eastern Band.

The museum also highlights the contributions of noted Cherokee leaders, such as Junaluska—who saved future-President Andrew Jackson's life at the Battle of Horseshoe Bend during the War of 1812 (ironically, it was Jackson who signed the Removal Treaty banishing the Cherokee to Oklahoma, a quarter century later) and Sequoya, who created the Cherokee written language.

The museum's gift shop contains an impressive collection of books and reference materials about the Cherokee and other southern tribes, as well as handsome works by contemporary artists and master crafters.

Across Drama Road from the museum stands Qualla Arts & Crafts Mutual Inc., an Indian-owned and -operated cooperative offering a wide variety of locally made craft items—including baskets, dolls, jewelry, and woodcarvings, as well as fine Native American crafts from other regions. Other popular attractions include the Cherokee Heritage Museum and Gallery (Big Cove Road, off US 441 N) and Unto These Hills, an outdoor drama staged mid-June through late August in the Mountainside Theatre, next to Oconaluftee Village.

It's the trout fishing, though, that most stands out among Cherokee's recreational offerings. In fact, both the North Carolina record brook and brown trout were plucked from Cherokee waters. The brook or speckled trout (Salvelinus fontinalis) is native to these mountains, though wild ones are now relatively rare. Rainbows (Onocorhynchus mykiss) have been stocked in North Carolina streams since the 1880s (the wild ones have an end-to-end, reddish-orange stripe, black spots, and red around the gills). Brown trout (Salmo trutta) have been stocked in mountain streams since the turn of the century. Each year, hundreds of thousands of brook, brown, and rainbow trout raised in the reservation's hatchery on Straight Fork are released along 33 miles of streams and in several ponds. Thanks to this ambitious stocking program, the Tribal Enterprise Waters are so well supplied with fish that it is hard not to catch something. A $5 tribal permit is good for up to 10 trout per day, using any type of bait or lure. Permits and detailed information are available on the reservation.

Hikers wishing to connect with the timeless spirits who inhabit the Qualla Boundary can explore the Mount Noble Trail, which starts in the parking lot of Oconaluftee Village. The 4.5-mile round trip can be hiked in conjunction with the Cherokee Arboretum Trail. The Mount Noble Trail ascends through hardwood forests to the 4,066-foot summit, where a fire tower affords hikers sweeping views.