[Fig. 15, Fig. 16] Florida's world-famous Ten Thousands Islands region is the final destination for the vast amounts of water flowing out of the Big Cypress Swamp. A myriad of mangrove islands, channels, bays, oyster bars, and creeks, the Ten Thousand Islands cover nearly 200,000 acres of coastline from Cape Romano off the coast of Marco Island, to just north of Cape Sable on the southwestern tip of Florida.

Most of the access to the region is through Everglades City and Chokoloskee, two very small and charming southern coastal towns that are beginning to bulge a little with the growth of tourism but are still holding onto a respectable part of their history. The towns' location at the very end of the highway (SR 29) and on the edge of the Ten Thousand Islands and the Everglades backcountry has defined both their history and their current popularity.

It's a place worthy of protection—a land where all the right ingredients come together to create a life-nourishing brew. Shallow coastal waters, abundant fresh water to mix with the salt water, nutrients from soil and decaying plants, and sunlight, have given rise to one of the most extensive and productive mangrove estuaries in the world.

Globally, mangrove habitats are as critical and perhaps as threatened as the world's rain forests. Everglades National Park protects 90 percent of all the mangroves in Florida.

The whole life-propelling system actually begins with the mangrove trees, the solar panels of the estuary. Powered by the sun, they capture and store energy. As the trees grow, older leaves turn yellow and drop into the water, sending energy into the system. The leaves are colonized by algae and fungi and then either decay or are eaten by small crabs, snails, and fish—initiating the tropical food chain. More than 3 tons of leaves can fall from a single acre of mangroves every year.

Many of the mangrove islands contain impressive shell mounds that were created by earlier inhabitants, the Calusa Indians. There are a very few instances of Native American tribes in North America able to depend almost entirely on fishing and gathering shellfish, and most of those were in the Pacific Northwest. But from as early as 1450 b.c. until the 1700s, the Southwest Florida Calusa Indians did just that and in the process developed an advanced maritime culture and social system. 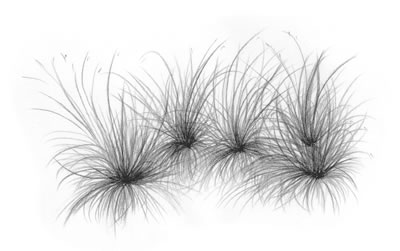 The mounds were created from oyster and whelk shells, some discarded after eating, others hauled in specifically for building purposes. In some cases the builders created dry ground where none existed. In others the Indians piled shells on existing islands. More than 100 shell mounds in varying sizes, from small refuse heaps to large islands, exist from Tampa through the Ten Thousand Islands. Chokoloskee Island is one such mound.

The Calusa made tools, weapons, and everyday household items out of shells, wood, bone, antler, and shark teeth. Masks, bowls, platters, canoes, and canoe paddles were carved out of wood. Axes, hammers, drills, dippers, and spoons were made from shells. Antler was used for knife handles and necklace beads. Shark teeth and barracuda jaws were used for knife and saw blades.

With European contact in the 1500s, however, came European diseases against which the Calusa had no resistance. By 1763, when the English gained control of Florida from the Spanish, the Calusa population had been reduced from an estimated 20,000 to several hundred, who were reported to have migrated to Cuba.

Small groups of Seminole Indians inhabited and farmed some of the shell mounds during the nineteenth century between government efforts to force their removal to the West. A military fort established on Chokoloskee Island in 1855 served as a base of operations for military forays into the mangrove country. Soldiers destroyed Indian homes and crops at every opportunity.

In 1857, a campaign of 75 men originated in Chokoloskee and proceeded up the Turner River. After three days of searching, the men discovered and destroyed a large Indian settlement and its crops. The Indians attacked, killed the captain in charge, and effectively ended the incursion.

Nevertheless, it was the last battle fought between the U.S. government and Native Americans in Florida. Another 164 Indians from South Florida were moved to Oklahoma to join the thousands of others from the Southeast that survived the forced migration. The remaining Seminoles were finally left alone.

Within a few years, the first settlers arrived in the Everglades City-Chokoloskee area. Trading posts were established serving both settlers and Indians, and white man's civilization slowly took over.

Today the Ten Thousand Islands serve as a place of recreation and exploration for outdoor-minded visitors from the world over. Some of the foremost shallow-water sport fishing opportunities in the world exist in the tidal channels, rivers, and creeks running between and around the islands. Fishing guides, fishing advice, fishing charts, and fishing tackle can be found in Everglades City and Chokoloskee.

Bird-watching is superb year-round, reaching a peak when migrants join the resident species in the winter. The best birding opportunities will come from a trip on the water, either with a commercial boat tour operation, with an eco-tourism company, or by renting a boat or canoe and striking out on your own.

You can also visit an alligator farm or a circa 1910 trading post, take a swamp buggy ride, or fly over the backcountry in a small airplane. Wildlife lovers will discover a world where nature still reigns, where brown pelicans, manatees, alligators, and bald eagles call each other neighbors. And where man is just a guest.

Fishing In The Ten Thousand Islands

Fishing in the Ten Thousand Islands is nothing new. The bounty of fish and wildlife found here has been feeding mankind for thousands of years. In fact, one of the most remarkable finds of ancient fishing equipment took place in the late 1800s during an excavation on Marco Island under the direction of a Smithsonian archeologist by the name of Frank Hamilton Cushing.

Digging into a mound dating back to 650 a.d., the Cushing expedition found advanced fishing tackle including composite fish hooks that were constructed out of items found in the environment. The hook shanks were made of small forked branches of a tree. Barbed points carved from deer bone were attached to the shorter fork with sinew and black rubber-gum cement made from the sap of a tree. Some hooks even had remnants of fishing lines, which were woven from palm or palmetto fiber, attached to them.

Even more interesting is the mention of what might have been artificial fishing spoons made from "the pearly nacre of the pinna shell." Also found on the site were plug-shaped floats made from gumbo-limbo wood, sinkers made from thick columellae of conch and whelk shells (the columellae is the tightly spiraled center of a large shell), and "reels or spools" made from clamshells for holding fishing line.

We also know that early Florida anglers ate more than 40 species of fish. Seatrout and redfish were among the most common remains in South Florida sites. The anglers also took plenty of sheepshead, catfish, jacks, black drum, snook, mullet, snapper, grouper, and as many as ten species of shark.

Regardless of their method of taking or the target of their prey, they were fishermen in the true sense of the word. They understood the movement of fish, the tides, the currents, and the seasonal migrations. They had to know these things. A tribe couldn't spend too much time not catching fish.

What we have no way of knowing is if they ever pursued fish for entertainment or if it was always just a job. Surely the thrill of the hunt was as great as or greater than it is today.

The anglers that come to the Ten Thousand Islands today are seeking something else. An escape from everyday life, a respite, a chance to reconnect with nature, for at least a brief time. The majority of the fishing in the Ten Thousand Islands is light-tackle, inshore action for snook, redfish, seatrout, tarpon, and snapper. Most guides operate shallow-running flats boats with casting platforms on the front and poling platforms on the back. Fishing guides are plentiful in Everglades City and Chokoloskee. They can be hired for half-day, or full-day trips.

The most popular prey is the snook, a wily, warm-water fish known both for the fight it puts up and its taste on the dinner table. They can reach weights of 40 pounds or more but most snook caught are in the 5 to 10 pound range.

As the story is told around Everglades City, the snook fishing craze was started by a local fishing guide who was experimenting in the kitchen, not on the water. Prior to the early 1950s, snook were always thought to be inedible, tasting like soap when cooked, and in fact were called soap fish. That was until a fishing guide decided to defy local culinary tradition and removed the skin on a snook filet before it hit the frying pan. The snook proved to be delicious: the soapy taste was gone with the skin.

These days dinner is the secondary reason for most sport fishing trips. The days of high harvests have been replaced with low bag limits and a conservation-oriented "catch-and-release" attitude that has become popular as a way to ensure good fishing the next time.

For Florida fishing license information check with your guide and see Appendix E.