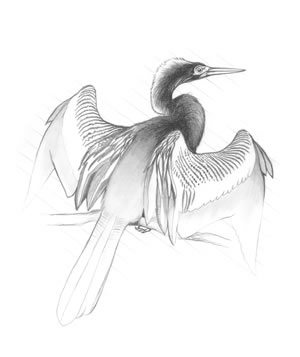 People commonly confuse anhingas and double-crested cormorants. Although anhingas prefer freshwater habitats, cormorants are likely to show up in freshwater or saltwater areas, wherever the fishing is good. In some places, like along the Anhinga Trail, anhingas and cormorants can be seen both fishing and roosting nearly side-by-side.

In general the anhinga has a longer tail, a thinner, snakelike neck, and a smaller body than a cormorant. Cormorants often fly low to the ground with rapid, ducklike wing beats. Anhingas, on the other hand, soar high over the marshes with their necks and wings straight out.

Male anhingas, which grow to 33 inches tall, are all black. The females have a brown neck and head. Both sexes have large silvery wing patches. They also have a pointed bill that they use to spear fish, which are brought to the surface, flipped up, and swallowed head first.

Both sexes of the double-crested cormorant are dark all over with orange throat patches. This 34-inch-tall bird has a thicker body than the anhinga, and although cormorants also swim with only their head and neck above the water, they are easy to distinguish by the down-turned hook at the end of their bill. They capture small fish by grabbing them with their strong bills.