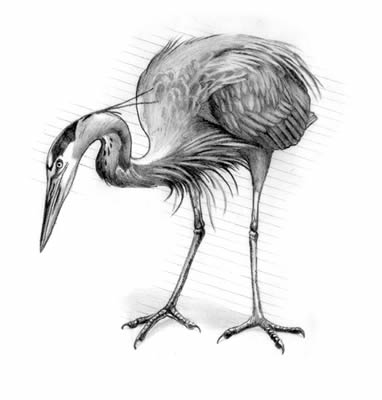 Even children watching this great bird with its slow wing beat, neck folded on its back, and long legs streaming behind, think theyve seen an amazing sightand indeed they have. The great blue heron (Ardea herodias), sometimes called a crane, can measure 4 or 5 feet from head to tail, with a nearly 6-foot wingspan. This fairly common slate-blue wading bird with the black crest patiently stalks its prey in the wetlands of Holland Island, standing motionless for many moments before striking with lightning speed to spear a fish with its long beak. The fish is then swallowed head first. A big fish on the banks with holes poked in its side may be a sign that the heron literally bit off more than it could swallow.